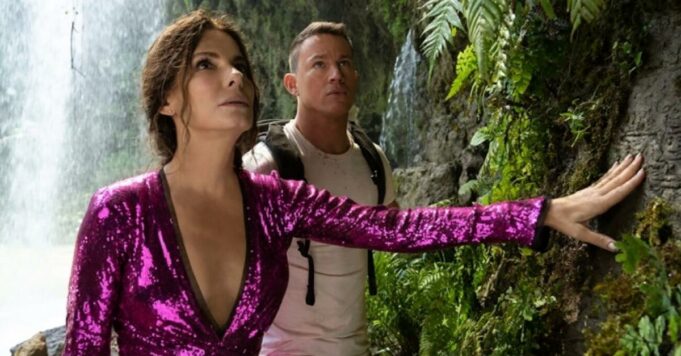 The New American Comedy The Lost City is revealed in a totally crazy teaser. Channing Tatum, Sandra Bullock, Daniel Radcliffe and even Brad Pitt are reunited for this film scheduled for March 23 at the cinema. Loretta Sage is a best-selling novelist, as she goes on promotion for her new book, Loretta Sage finds herself in the middle of a totally wacky adventure alongside model Alan (Channing Tatum) hired to cover her new book. They are kidnapped by a totally crazy billionaire convinced that she will be able to help him find the hidden treasure of which she speaks in her latest novel.

The film promises to be hilarious with situations as crazy as each other. The two main actors Sandra Bullock and Channing Tatum confided in this new film, especially on the scene with the leeches. “He worked so hard for a comedic sequence and he knew it had to look a certain way and be done a certain way.” says Sandra Bullock. Channing Tatum adds: “We didn’t have any live leeches on set. We had a man sticking rubber leeches on my butt. It was my second day on set, and I had to be naked. I said, ‘ Hello, my name is Chan. I’m going to be naked today.’ Everyone was trying to look away and leave.”

A cameo for Brad Pitt

Worn by Sandra Bullock, Channing Tatum and Daniel Radcliffe The Lost City gets a cameo from Brad Pitt. Moreover, the actor says he was convinced by Sandra Bullock herself. While Sandra Bullock has agreed to replace Lady Gaga in Bullet Trainthe new project of Brad Pitt, this one asked him for a small cameo in The Lost City, which he accepted without flinching. Pure EWChanning Tatum said: “He came in and he tore it all up. He’s really funny. When he signed on to play this particular character, which fits perfectly into this weird world, he gave it his all. I had met him before, but working with him was completely different. I couldn’t concentrate. It was as if I had gone out of my body to observe him.” The film will be released in theaters on March 23.