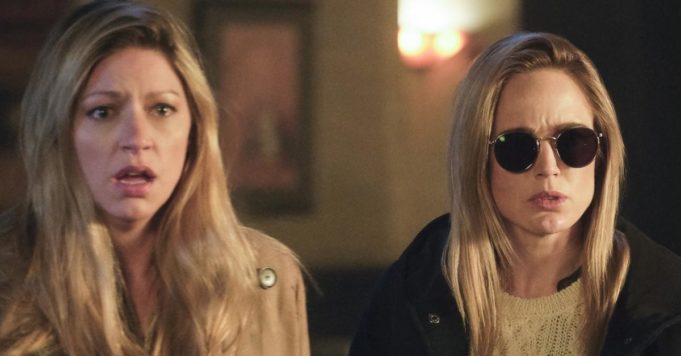 Season 6 of Legends of Tomorrow will be full of surprises and tackle the theme of aliens in a different way from other shows on the Arrowverse.

In the Season Finale of Season 5 of Legends of Tomorrow, the Legends faced an as yet unknown threat. In the last few minutes, Sara was kidnapped by aliens and found herself teleported to a spaceship. While the inhabitants of the Waverider have found themselves in unlikely situations on numerous occasions and made jumps in different time periods, even parallel lands, they had never before encountered aliens … During the DC event FanDome, which took place last weekend, the writers of Legends of Tomorrow revealed that they wanted to do something “bigger and different” with the aliens from the show!

The writers of Legends of Tomorrow want something that would give the show a chance to put its own stamp on it. Keto Shimizu showrunner explained: “We’re trying to look at some alien genres. Supergirl is making her own version of aliens, and we’re trying to make her feel and look really different; we put our own imprint on it.”. Apart Supergirl and soon Superman and Lois, no other Arrowverse series has faced aliens. Of course, following the events of “Crisis on Infinite Earths” the last season, Supergirl and Black Lightning merged into the same Earth as the rest of the heroes, on Earth-Prime. This means that shows like Legends of Tomorrow and The Flash dealing with aliens more frequently shouldn’t be such a big surprise … But then, how are the Legends going to deal with Sara’s absence in Season 6 of Legends of Tomorrow?