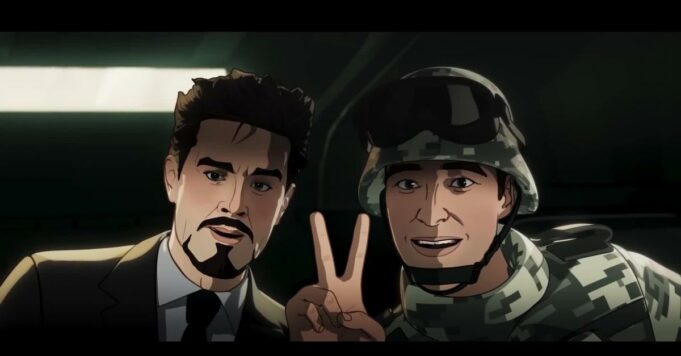 On August 11, What If…?, The brand new Marvel series began. A seemingly innocuous animated parenthesis in the large connected universe of studios … but which is nevertheless more important than it seems! Focus on THE series that heralds the future of the MCU!

After Wandavision, Falcon and the Winter Soldier, and the recent Loki, What If…? is the new series of studios Marvel. When it was announced in April 2019, it was thought that this animated series (a first for the studios) was going to be a simple anthology without any connection to the vast Marvel Cinematic Universe. A sort of lively and light getaway meant to satisfy the overflowing imagination of fans, far from the big issues posed in films and live programs. Series Loki, whose season 1 ended recently, has yet proved the opposite by giving birth to the multiverse, and by dubbing What If…? as the logical continuation of the adventures of the God of Malice. In doing so, The animated series becomes a canon element of the universe and a vital link in the future of the MCU.

A prestigious status confirmed by executive producer Brad Winderbaum : “It’s no coincidence that the series comes right after Loki. The multiverse has erupted in all possible directions. What If…? gives us a chance to explore this. Without going into the details, I think I can tell you that the series, as a project and as a story in its own right, is as important as any other, and is also woven into this great tapestry. of the MCU. ”

Putting the multiverse into practice

Inspired by the eponymous comic book series created in 1977 – which offered rewritings of the History of the Marvel Universe – What If…? already counting 2 seasons announced, each composed of 9 episodes. It offers “stand-alone” episodes, that is to say independent of each other, each based on an alternate universe, such as the one where Agent Carter inherits the shield of Captain America, the one where T’Challa becomes Star Lord instead of Peter Quill, or the one where the Avengers turn into zombies.

This format will not prevent some surprises, especially that all these episodes may have a same red thread, and potentially a same big bad. Moreover, they all already have one thing in common: Uatu The Guardian, a cosmic entity responsible for observing the Earth and the events that take place there, theoretically without intervening, and who will be the narrator of all the episodes of the series. A character voiced by Jeffrey wright (Westworld, The Batman), whose status should also evolve, as the actor himself suggests: “In the original comic books, he’s an observer. Here in the first season, he starts off as an observer, but he gradually becomes more and more constrained by what he watches.”

The Guardian is in particular responsible for overhaul the rules of the multiverse for spectators. The multiverse – this idea that several alternate realities coexist in the MCU – was previously mentioned in Spider-Man: Far From Home, explained at greater length in the series Loki therefore, and it will be the heart of the next film based on Doctor Strange, subtitle “In the Multiverse of Madness”, expected on our screens in March 2022. With the departure of Iron Man and Captain America, it is not surprising to see the role of the Sorcerer Supreme gain in importance in the MCU. An importance that is already reflected in the series What If…?, in which Strange stars in the final two episodes of season 1, and is a privileged interlocutor of the Guardian, undoubtedly to try to put order in this chaotic multiverse and to prepare his next film.

MCU Phase 4… and beyond?

In a recent interview, producer Kevin Feige, Commander-in-Chief of the MCU, even compared the establishment of the Multiverse To introduction of the Avengers by Nick Fury in the very first Iron man, in 2008 ! He even described how Marvel intended to prepare audiences for this new paradigm: “We reviewed the Multiverse and its rules and how to do justice to all the excitement this idea generates. Besides, this Multiverse fascinates us and also excites us enormously! We love this stuff and we really love all the potential. storytelling that it brings, but we thought we had to establish it in a fairly didactic way, as we introduced briefly in Doctor Strange, and then falsely in Spider-Man: Far from Home. ( …) It’s not just die-hard fans who want to follow the story of this Multiverse. “

In addition to this educational role of permanently introducing the multiverse to spectators before it is deployed in blockbusters in theaters, What If…? therefore has a more “meta” role: unifying all the Marvel films and announcing the future of the studio. For example, the series shows us that Spiderman played by Tobey Maguire and Andrew Garfield 10 and 20 years ago are consistent with the current Marvel Cinematic Universe. A way for the studios to recover the legitimacy of the previous films, produced at the time under other banners. And who would allow to see all the incarnations of the Spider-Man on the screen, as rumor has predicted. A logic that works as much for old films as for future productions.

With the acquisition of Fox studios by Disney in 2019, Marvel has indeed just recovered the rights of the characters of the X-Men (including Wolverine, Magneto and Professor X), 4 Fantastic or even Dead Pool. The multiverse will thus allow all of its new elements to be incorporated into the current MCU while maintaining consistency on the screen. The machine is also officially in motion, since a new feature film Fantastic Four under the Marvel banner is already announced in theaters for 2024. A film which should also be the conclusion of Phase 4 of the MCU … and prepare us for an even crazier phase 5!

Far from being a simple animated interlude, the series What If…? is therefore much more important than announced, and visibly appears as an essential link in the MCU. Logical continuation of Loki, playful presentation of the multiverse, preparation for the next cinema meetings, and opening on phase 4 and the future of Marvel … What If…? is definitely the essential series of the summer!