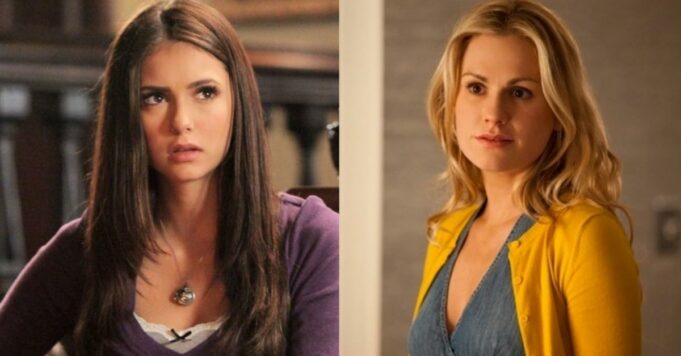 There are a lot of similarities between the characters of The Vampire Diaries and True Blood and here is proof!

Almost four years since the series The Vampire Diaries ended, while it’s been over six years for True Blood, which is being rebooted by the creator of Riverdale. The two vampire shows were broadcast during the same period, from 2008 to 2014 for True Blood and from 2009 to 2017 for The Vampire Diaries. And if the stories are different, with a more bloody and trashy staging for one and more romantic and teeny for the other, we couldn’t help but notice some commonalities between the characters of two series . Between Elena Gilbert and Sookie Stackhouse, Stefan Salvatore and Bill Compton or even Damon Salvatore and Eric Northman, there is something to see double on the side of their personalities or their intrigues. Overview.

What Elena Gilbert de The Vampire Diaries and Sookie Stackhouse from True Blood are many. For starters, they are both the main actresses of their series and they are both orphans. Then, they look human at first, but upon close examination they turn out to be supernatural, one being a double, the other a fairy. And finally, they both share the hearts of two vampires: one Damon and Stefan Salvatore, the other Bill Compton and Eric Northman.

Stefan Salvatore and Bill Compton have a bit of the same type of character. They both play 19th century vampires who live in peace with humans and most importantly, they have the same character. They are very serious, kind, sweet and romantic, while hiding an extremely twisted dark side, one being in particular a ripper having trouble controlling himself when he tastes blood, the other becoming downright the antagonist of season 5 of True Blood. Oh, and of course they’re both in love with the main heroine.

The parallel between Damon Salvatore and Eric Northman is very easy. They both embody the sexy and rebellious vampire who does as he pleases and who disturbs the main heroine, Elena for one, Sookie for the other. They spend their time doing bullshit, but we forgive them every time because they are sexy and then because, from time to time, they do good stuff. And they move in the right direction in contact with their beloved, while falling back into the dark side from time to time. And we are not talking about their sartorial and musical tastes.

Granted, Bonnie Bennett is a witch, unlike Tara Thornton who is quite normal until she is transformed into a vampire in season 5 of True Blood, but they both play the role of the best friend of the main heroine who does not have an easy life and endures a lot. And most importantly, they both deserve better than the ending they got and could have had an entire series devoted to their characters.

At first, Caroline Forbes and Jessica Hamby come off as superficial teenagers who will probably only have a very secondary role in their respective series, but it is well to underestimate them. When they are both transformed into vampires, they prove to be as interesting as they are badass, independent and intelligent.

On the one hand, we have Katherine Pierce, a nasty badass, sexy and tangy, who exudes confidence and who likes to seduce and be the center of attention of men. A manipulative vampire who is desperate to get what she wants and who always ends up in the worst hits. And on the other, we have Sophie-Anne Leclerc, and it’s pretty much the same thing.

If we had to choose between Klaus Mikaelson from The Vampire Diaries and Russell Edgington of True Blood, that would be difficult because they look very similar. They both embody legendary antagonists and bloodthirsty psychopaths, which have captivating punchlines and monologues and which get more complex the more you get to know them. As fascinating as each other, Klaus and Russell are clearly on an equal footing.

Pam de Beaufort in True Blood is she the hidden sister of Rebekah Mikaelson in The Vampire Diaries ? In any case, they share a lot of qualities and faults. They are both whimsical, susceptible and resentful, with great character, not at all the type to let go. But they are also very loyal, frank (even if it hurts), sensitive and endowed with a big heart under all this fiery personality.

One is Elena Gilbert’s ex and best friend, the other is Sookie Stackhouse’s brother, but substantially, Matt Donovan and Jason Stackhouse have somewhat of the same plot. These are both humans among all these supernatural beings, who end up becoming cops because they are tired of living in a climate of insecurity, surrounded by vampires and werewolves.