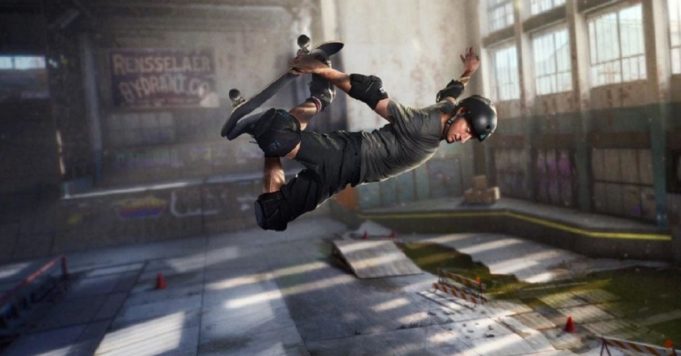 The demo for Tony Hawk’s Pro Skate 1 + 2 remaster may be terribly short, but it offers an instant throwback to our teenage years, and that’s kind of what we were asking for anyway.

The Tony Hawk’s license is sorely lacking in skate video games. The general public has been losing interest in the genre for quite a number of years now, and its latest representative game, Skater XL, has been a big disappointment for skateboard fans. Since the announcement of a remaster by Activision the hype for this return of Tony Hawk has been great, on the one hand because this remaster represents the hope of having a great skateboarding game that will also appeal to the general public where the Session and Skate games were only moderately successful. But also because it does vibrate the nostalgic chord of many players, who have necessarily spent hours on one of the many opus of the license, whether it is the Pro Skater or the Underground.

And this nostalgia hits us right in the face long before we start playing, with a intro cutscene featuring skate landmarks already present in the first game from Hawk to Burnquist via Reynolds but also lots of little “new” ones (understand here: skaters who were not there when the game was released), like Bufoni or Arakawa to quote a little women in this environment full of guys. All with Rage Against the Machine’s Guerilla Radio and the magic is already happening. We will be entitled to a very light playlist for this demo but just with RATM and Superman from Goldfinger, it already does the job.

Finally, this demo is extremely frustrating since the sessions will only last two minutes each. So we end up doing dozens of tiny sessions on Warehouse, the only map available for this demo, to rediscover the pleasure of yesteryear. Aside from taking your board in hand, all the others Usual Tony Hawk gameplay mechanics are here and in particular the manuals or spine transfers, which were not present in Pro Skater 1 and 2 originals. We quickly find the sensations to which we have been accustomed but this demo is really intended for fans of the license.

Don’t expect to see any tutorial or key indications and the demo really relies on the knowledge already known to its player. Almost logical when we know that it will be available initially only to those who have pre-ordered the game. very cool little novelty of this remaster, it’s the animation when you fall. The skater will glide visually before automatically returning to his board. The action is accompanied by a rewinding sound and a muffled sound effect on the music which makes the whole thing very nice. The other little detail that makes the difference is that you can change song by pressing the right joystick.

It will take barely three or four two-minute sessions to find what made Tony Hawk’s license great and that gives great hopes in what will propose the final version. Whether it’s music, gameplay and sensations, with modern graphics, being able to play full version of the game, still scheduled for September 4 seems so far away. The scary dark spot is customization. We could wander through the game menus and see the possible clothes and boards without being able to interact with them, and we sincerely hope thatActivision not going to try to monetize it all and force you to go to the cash shop to get access to it.