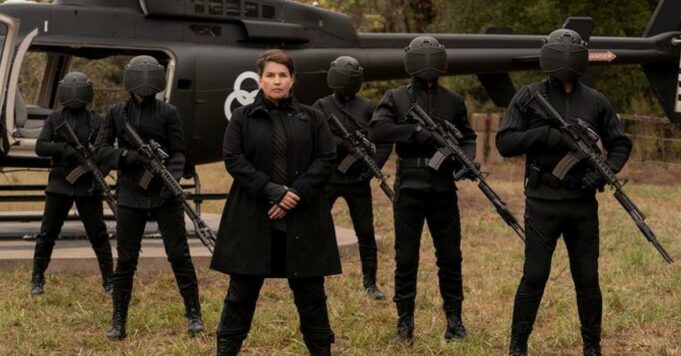 The spin-off World Beyond continues to reveal the terrible actions of CRM!

Mantra of the day: never say never! While we thought we finally understood the meaning of the letters A and B in the franchise The Walking Dead, now another interpretation calls everything into question. Indeed, if episode 7 of the final season of World Beyond led us down the track that the A’s would be guinea pigs for the Votus project and the B’s rather a force / an asset for the CRM, it may well be that the reality behind this ranking is even more subtle and dark than that. This is in any case what proved to us by episode 8 of season 2 of World Beyond, broadcast last Monday on Amazon prime.

Indeed, in this episode titled “Returning Point”, the plot reveals a new clue to us on the real meaning of A and B within CRM. As Silas chats with Dennis, the latter explains to him why people consciously decide to follow the orders of the military. According to Dennis, the CRM spends its time convincing their supporters that their decisions (even the most horrific) are made for “the greatest good of all“. Huck’s former husband then underlines the great force of conviction of the CRM capable of “washing the brain” of people, even the most refractory. This is why the latter is very interested in the idea of ​​recruiting en masse people likely to be easily “manipulated ” to make cannon fodder.

Confidences which therefore call into question our previous theory. And for good reason, Dennis’ comments suggest that A’s and B’s would be ranked solely on the basis of their potential for emotional and mental manipulation. Which means that the B’s would therefore be easily manipulated people, unlike the A. We understand better why Jadis always considered Negan, Gabriel and Rick as potential B. “a little lost” (and who wouldn’t during a zombie outbreak, honestly ?!) in order to gain more control. We only have to hope to finally have confirmation of this hypothesis in the last two episodes of World Beyond.