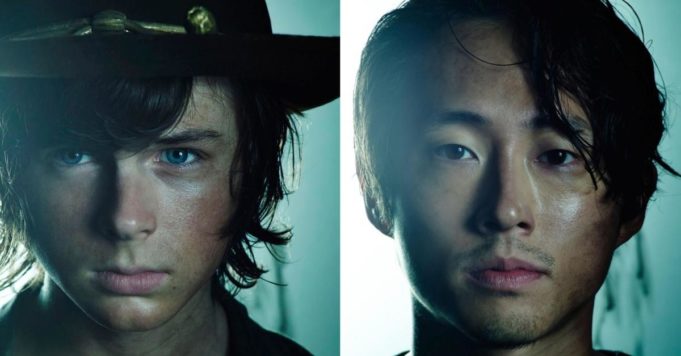 Have you ever noticed this strange detail about the death of 2 important characters in The Walking Dead?

Even if The Walking Dead is no longer in the competition, you can continue to vote every day just here to win the World Series Cup for your little darlings. And while waiting to know who will emerge victorious, we dive back into the past seasons of The Walking Dead to focus on a strange and interesting detail about Glenn’s and Carl’s deaths. As one fan pointed out, either for one or the other, Carl and Glenn both die “off season” although this happens in episode 1 of season 7 and episode 9 of season 8 respectively.

Glenn’s death does not occur in a “present” timeline since it is through Rick’s memories that we see him getting his skull blown up by Negan, unlike Abraham we see being killed in the last one. Season 6 episode. Glenn thus dies between season 6 and season 7, and this is a detail he shares with Rick’s son, Carl Grimes.. Yes, season 8 opens with Rick’s red, tearful eyes, and you have to wait until the end of season 8 to find him in this posture and understand the situation. That means the whole of Season 8 is a flashback to what led Rick to this exact moment.

So Carl is also dead in a parallel temporality before Season 8 officially begins, although the fact that the whole of Season 8 is actually a flashback muddies the waters a bit. This common detail does not make their death any less difficult to digest, especially since in both cases, the scenes were rich in emotions.. But it’s interesting to see how The Walking Dead continues to play with its timelines even when it comes to telling major events on the scale of the series. The good news is that there are only 3 weeks left to wait before seeing if episode 16 of season 10 of The Walking Dead, which airs on OCS on October 5, will also play out over time.