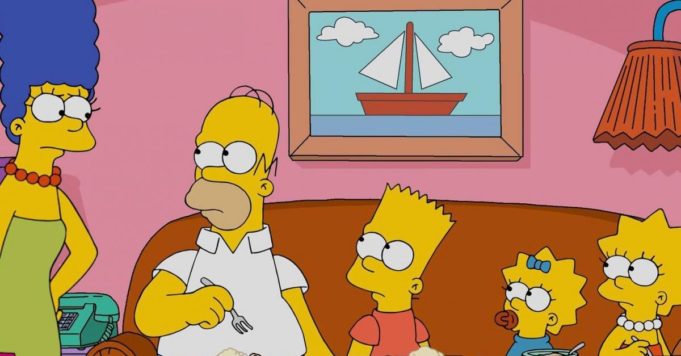 The Simpsons series is full of anecdotes and secrets, but do you know the story behind the legendary painting from Homer’s and Marge’s salon?

A brown sofa, an old-fashioned floor lamp, an oval colored carpet, a landline telephone placed on a bedside table … One could almost describe the furniture present in the Simpsons eyes closed ! Moreover, the interior of their home has inspired many manufacturers such as Ikea. But the decorative element that most attracts our attention, this is the famous painting hanging on the wall behind the little family’s sofa. Called “Scene from Moby Dick”, this drawing with simplistic patterns represents a boat sailing in the open sea. Impossible to miss it, it is almost present in each of the episodes of the animated series. If it is often twisted, unhooked or damaged, it has a great importance in the history of the house of Simpson, just like this secret room discovered by a fan!

First, it is important because it is Marge who painted this picture for her husband Homer. The father of the family was looking in his house for something that he could sell, so he became interested in this valuable painting (it is not done by reselling gifts). Okay, he’s a bit stupid and finally crushed the board on his head in another episode. Luckily, Marge had planned the coup by painting many other models. So, as soon as one is damaged, it replaces it with a new one. After 32 seasons under his belt, the series The Simpsons necessarily evolved and so did the representation of the painting. The boat has changed and grown with the evolution of the children Bart, Lisa and Maggie. The craft even turned into a spaceship when everyone left the family home. Thereafter, one could even expect to discover a new frame in the series: in the episode “Barthood” of season 27, Lisa paints a boat on the sea, and Marge tells her that she will hang it on the above the sofa. Sometimes considered as a simple decorative object, sometimes as a safe or other various representations, this pretty painting accompanied the multiple adventures of Simpsons for over 30 years now.