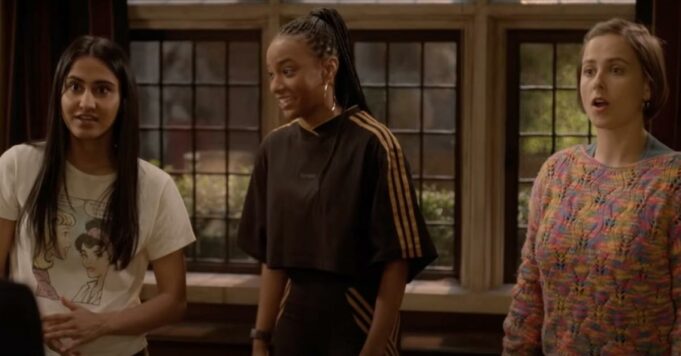 The new HBO series The Sex Lives of College Girls is coming soon! For the occasion, a first trailer has been unveiled.

HBO’s newest creation, the Sex Lives of College Girls, arrives November 18! A little over a month before the release of the first two episodes, a trailer has just been unveiled. The series follows Leighton, Whitney, Bela, and Kimberly, four young girls who have just entered Evermore College in Vermont. We will follow them in their discovery of their sex life, their entry into the world of university and all the hardships they will have to face. The series was created by Mindy Kaling who notably produced the Netflix series My First Times which has also been renewed for a third season. She worked on this project alongside Justin Noble, writer and producer of Brooklyn Nine-Nine.

In the trailer we discover this small group of four girls as different as each other. We can already feel the Mindy Kaling humor through these few images, a feel good series that will be pleasant to watch. The lead roles are held by Pauline Chalamet (Kimberly), Amrit Kaur (Bela), Reneé Rapp (Leighton) and Alyah Chanelle Scott (Whitney). They will be alongside Dylan Sprouse, who returns to small screens after playing Trevor in After Chapter 2. Let’s not forget Midori Francis (Dash & Lily) or Gavin Leatherwood (The New Adventures of Sabrina), beautiful people for this new HBO series. The series consists of 10 episodes and take out your diaries to jot down the dates: the first two will be broadcast on November 18, three others on November 25 and December 2, the last two episodes will arrive on December 9! See you on November 18 for the first two episodes.