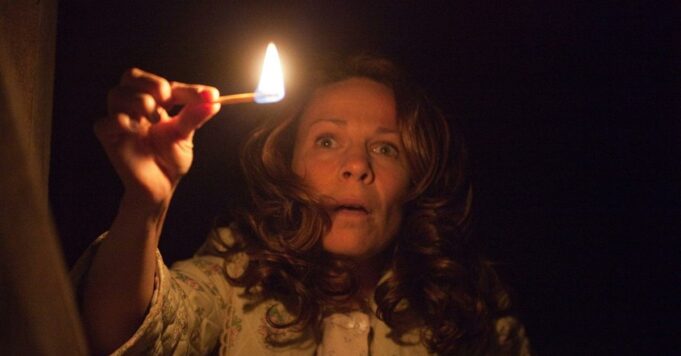 The Conjuring 3 is revealed in a new extract in which Lorraine Warren is keenly caught by a demon who threatens to kill her.

Scheduled for this summer, The Conjuring 3 is revealed via a new photo in which the Warrens try to save little David, possessed by a demon. After this scary shot, the studios Warner Bros. reveal another excerpt as a video clip. For one of the first times, one of the demonologists finds himself threatened by a formidable demon. On these images, we can see that Lorraine Warren managed to flee a kind of witch in the middle of the forest, before she finds herself chased by a demonic entity. At the edge of a cliff, as Lorraine was about to find Ed, a hand grabbed her, plunging her over the edge of the precipice.

This new excerpt from The Conjuring 3 has enough to offer us a nice glimpse of the atmosphere of this opus. For the first time, Ed and Lorraine Warren move away from the world of haunted houses to treat an investigation much more real than usual. They will help Arne Cheyenne Johnson and his family get rid of a demonic entity that will make the young man do the irreparable. The latter says he killed his owner under the influence of the devil, Ed and Lorraine Warren having actually testified during his trial. We can’t wait to discover this third installment of the franchise, even if The Conjuring 3 maybe take a risk by stepping away from the world of haunted houses.