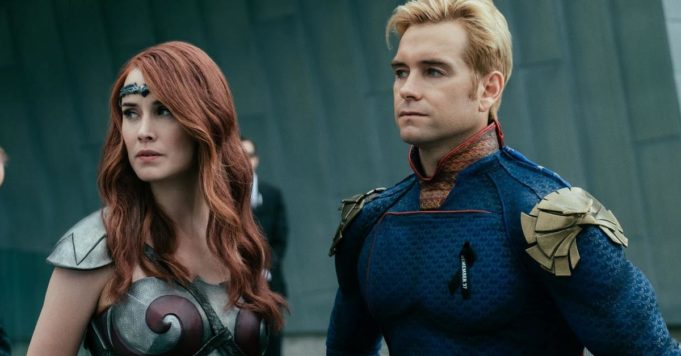 After the MCU, it’s the turn of the DCEU to have the right to its wink in the series The Boys.

What would our world be like if superheroes really existed? This is the question the series asks The Boys, which Season 2 aired last week on Prime Video. Forget the Avengers, Vought’s superheroes are more dangerous and selfish celebrities than defenders of Earth. They are even actors and have the right to their own cinematic universe called the VCU (for Vought Cinematic Universe). As you can see, this is a reference to the famous MCU. History that there is no jealous, the DCEU also had the right to its winks. In the first episodes of season 2, we can see an advertising campaign aimed at promoting the next VCU film: Dawn of the Seven.

The plot of the film is simple, the superheroes help each other catch criminals and realize that they work best as a team. This is how they decide to form the Seven. Does that remind you of anything? The most obvious nod is in the title of the film. Dawn of the Seven in fact refers to Batman v Superman: Dawn of Justice. The poster style even copies that of the DCEU blockbuster, and that’s not all. Guess who will be in charge of the soundtrack of Dawn of the Seven ? This will be the composer Hans Zimmer, who has also worked on the music of the DCEU films, including Batman v superman and Man of steel. What make us curious to discover what other references could be made in the rest of the season. In any case, we already know that Season 3 will host Soldier Boy, a parody of Captain America.

Don’t forget to support your favorite series during the 2020 Series World Cup by voting HERE.