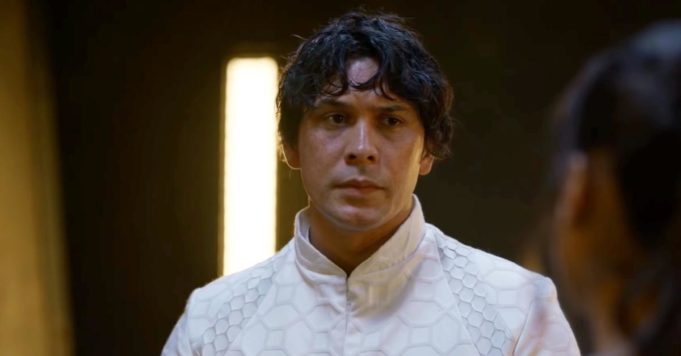 Some theories suggest that Bellamy got screwed in season 7 of The 100.

A major change awaits Clarke, Raven, Murphy and the others in episode 13 of season 7 of The 100, but today we dive back for a few moments in an episode already broadcast. Yes, it’s Bellamy’s stay on Etherea that we’re interested in, and more specifically the possibility that everything was invented. We have seen that thanks to their technology, the Disciples of Bardo have the power to immerse their prisoners in simulations larger than life.. It is for this reason that we wonder about the possibility that Bellamy was also trapped in a simulation rather than to have been really sent on Etherea.

As a reminder, it was during his stay on Etherea in episode 11 of season 7 of The 100 that we found Bellamy after a long absence. The latter had been sent, along with a Disciple, to an unknown and inhospitable planet after being thrown into the Anomaly. And it is on Etherea that he would have “seen the light”, or rather had a vision of Bill then of his mother, which would have pushed him to join the cult of the Disciples. But could it just be that Bellamy had been a prisoner on Bardo all this time, and Bill had made him believe he was on Etherea? That could in any case explain his visions …

Ever since he had these visions, Bellamy sided with Bill and he had little hesitation in betraying Clarke and the others when the subject of the Flame came up. Knowing that Clarke was an enemy of size and that she cared deeply for Bellamy, just like Octavia, Echo and many others, Bill could have used the young man to gain the advantage. And if so, his plan clearly worked. There are only 4 episodes left before the end of the series and if Bellamy has been manipulated, then the series should quickly reveal it. However, it could also be that he actually had a revelation about Etherea, which does not bode well for the end of The 100.