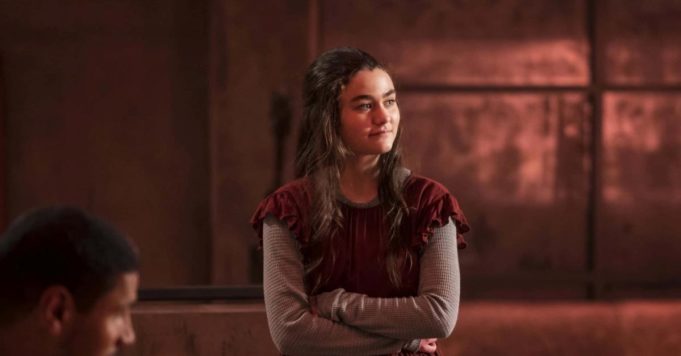 After the broadcast of episode 14 of The 100 season 7, here is our verdict of “A Sort of Homecoming”.

Last week in The 100 season 7, we witnessed the unexpected death of Bellamy, killed at the hands of Clarke to protect the life of Madi, who is being hunted by the shepherd Bill Cadogan and Sheidheda. And in Episode 14 airing this week, a new life was sacrificed for the teenager’s survival … It all unfolded on Earth, as Clarke and her people were repatriated to where it all began. for them. Very quickly, the heroine also announced to have killed Bellamy but Echo and Octavia had an improbable reaction, including the gesture of the young woman and hugging her. However, none of the survivors could return to Sanctum after Clarke broke a disciple’s helmet, the only possible way out to discover a new breach of anomaly.

Except when Sheidheda landed on planet Earth in the bunker, Clarke was quick to want to protect Madi, and Raven had to get to work trying to retrieve the broken helmet. Problem is, the villain has real strength and was able to wander the hallways without anyone seeing him. As Hope and Jordan grew closer (the arrival of a three-part love story from the end of The 100, weird), that Niylah was drinking alcohol and that Clarke, Octavia and the others were stuck in a room, locked up by Sheidheda, Gabriel was teaching Madi to play the piano … when Madi was suddenly stabbed in the back by force of evil. To protect Madi, Gabriel fought with Sheidheda but ended up being yet another victim, later dying in Hope’s arms, surrounded by other survivors. A death much more touching than that of Bellamy, finally …

As for Indra and Gaia, who were found on Earth, waiting for her mother’s return, they also fought with Sheidheda before she disappeared. Madi, tired of seeing lives shattered to save her own, then decided to stab herself with Sheidheda’s weapon and then disappeared in green smoke, surely back on Sanctum or Bardo. Finally, a bomb was sent by the disciples into the bunker, and if Miller managed to get rid of it just in time, the explosion still caused some damage, the ceiling having collapsed on Emori and Murphy … Two episodes from the end, we feel that all the survivors will end up dying little by little and we are finally no longer really surprised by the twists and turns. Until then, you can still vote for The 100 in the 2020 World Cup.