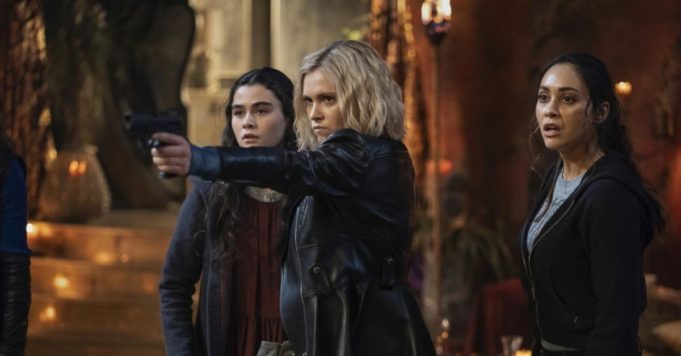 The promotional photos for episode 13 of The 100 season 7 have been revealed.

There are many questions about episode 13 of The 100 season 7, especially what awaits the survivors now that they are (almost) all reunited on Sanctum. Indeed, Clarke returned to the planet alongside Raven and Gabriel with the aim, we imagine, of finding the Flame and giving it to Bill … But when the heroine of the post-apocalyptic series will discover that Sheidheda has made a real carnage by causing chaos, how will she react? It could be that in “Blood Giant”, Clarke finally tries to kill the force that took possession of Russell’s body if we believe the promotional photos unveiled.

Although Sheidheda does not appear in the stills for Episode 13 of The 100 season 7, one can easily assume that Clarke is pointing her gun at him, given that she is trying to protect Madi, along with Emori and Raven. Also, we know that nature will take over Sanctum with the red sun, which will still cause some damage on the planet. Will Murphy sacrifice himself to save his girlfriend and his people? Will we witness a new death in this episode? See you next September 9 on The CW to find out. Also, we finally know the broadcast date of the Series Finale of The 100 and it is very soon.