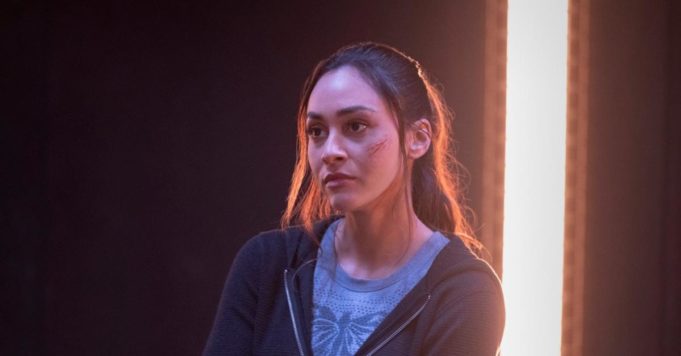 Season 7 of The 100 is on hiatus and things will get complicated when it returns.

We were wondering recently if Bellamy went to the dark side for good in season 7 of The 100, and we will have time to think about the answer since the series is taking a little hiatus and will only be back on September 9 on the CW. We take the opportunity to wonder about something else after seeing the promo video for episode 13. As you can see above, “Blood Giant” will bring its share of threats, so far nothing new. However the big change lies in the nature of the threats in question which, this time, will not only be of human origin but above all natural.

Clarke returns to Sanctum under duress from Bill, who has sent his friends to an unknown planet. And on his return, she realizes that things have escalated and that Sheidheda is at the head of the community. But the 2 men will not be her greatest enemy in episode 13 of season 7 of The 100 since it is indeed the entire planet that will turn against her and all her friends. Natural disasters are poised to befall the people of Sanctum and for once, we even agree with Bill who expresses the wish to leave the planet as quickly as possible.

Returning to natural hazards, season 7 of The 100 could allow alliances to form since humans will all be on the same side to survive. We hope, however, that this will not distract them too much from the ongoing intrigues, which still need to move forward before reaching any resolution. Even though Season 7 has 16 episodes, the end will come quickly and there are still many unanswered questions. We also hope to see the assembled group again – with all the characters on the same side including Bellamy – before the broadcast of the very last episode of the series.