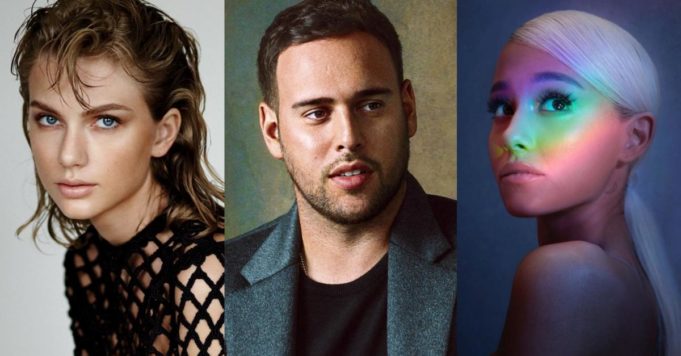 Yet very politicized and aware, Ariana Grande is these days very silent about the Scootergate, the case between her manager Scooter Braun and popstar Taylor Swift!

Scootergate. If we told you a little earlier in the day that Ed Sheeran and Bruno Mars have just unveiled their collaboration “Blow”, it is clear that musical news is always blocked by the Scootergate. For those who have not followed, this is the name given to the case between Taylor Swift and Scooter Braun. Last Sunday, various reports and media announced that the manager of Demi Lovato, Justin Bieber and Ariana Grande among others had just acquired Big Machine Label Group via his company Ithaca Holdings. Completely upset by the news, Taylor Swift did not fail to turn to Tumblr to share with his fans his disappointment to see that his former collaborator and president of the said label, Scott Borchetta, sold the company which she kept afloat for 15 years and therefore her entire catalog (that is to say her first 6 albums) to the man she hates since he orchestrated some of her public humiliations, Scooter Braun.

The Scootergate took a real turn when Taylor Swift said he never had the opportunity to buy the rights to his catalog. (This is partly false since Scott Borchetta offered to buy her albums one by one, each time she would release a new record …) Since then, all those close to Scott Borchetta have joined him and him have brought their public support, like Justin Bieber, Demi Lovato or Sia. But on the side of Taylor Swift, we do not hide his disgust: Todrick Hall, Halsey and even Katy Perry are pro # WeStandWithTaylor. And if the Scootergate risks turning into a school case for management training but also economics, the general public still wonders which side Ariana Grande is on. It must be said that the singer is not known to have her tongue in her pocket.

And yet, since last Sunday, the interpreter of “Thank U, Next“and”7 Rings“seems very silent. A source assured Variety that Ariana Grande “is frustrated with this whole affair “ because she would like to express herself and give her opinion but Braun Scooter “encourages all of his artists not to get involved“. Wise decision concerning him. With more than 158 million followers on Instagram and a career that now counts 4 # 1 albums, two # 1 singles, three American Music Awards, two Billboard Music Awards and a Grammy Award, everything Ariana Grande says can be counted against one of the two camps. But what fans of Ariana Grande know for certain is that their idol is basically on Taylor Swift’s side. This is precisely because the situation in which the country girl become popstar is today could happen to Ariana Grande.

Ariana Grande, on the rise, could soon (one day!) Be tempted to change management team, at all. So that would include his record company and his manager. In doing so, she would find herself in exactly the same scenario as Taylor Swift: leaving knowing that she does not have her catalog, what she thought, writing, producing and performing, or staying hoping that one day she will manage to own everything that is rightfully her. By leaving Big Machine for UMG, Taylor Swift made sure she owned everything she created. An attitude which must probably inspire an Ariana Grande caught between her loyalty to her manager Scooter Braun and her aspirations as a pop artist. In the rest of the news, note that PNL continues to chain certifications in France!