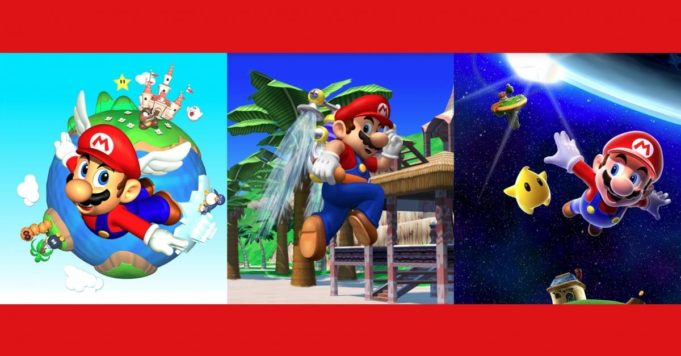 After a short crossing of the desert, Nintendo finally offers us a title on Switch! This one is not the least, since it is a compilation of 3 JV behemoths, Super Mario 64, Super Mario Sunshine and Super Mario Galaxy. Here is our take on the 3D All Stars Collection.

It had been more than a year since the rumor of a remaster featuring Mario titles in 3D came back again and again on the net. It is occasionally 35 years of our favorite plumber that Nintendo has finally decided to formalize the thing, with a wait of less than 3 weeks to get its hands on Super Mario 3D All Stars.

A compilation that divides

Because yes, contrary to what we thought, the title is a compilation, not a remaster, this is the first disappointment. When you see the absolutely flawless work that has been done with Crash Bandicoot, Spyro, or even more recently Tony Hawk’s, we tell ourselves that Nintendo has not really sprained by offering titles that have finally had very little improvement graphically speaking.

Another point that was quickly noticed is the inexplicable absence of Super Mario Galaxy 2, for which Nintendo did not wish to speak. A disappointment for the fans as the title was a real success as much critical as commercial.

The lack of remaster is all the more obvious with Super Mario 64, especially when we discovered the level resuming the Mushroom Kingdom in Mario Odyssey. A moment that had me I admit tore a tear it was so magnificent. In Super Mario 3D All Stars, here has a title with improved textures and a primary anti-aliasing system, not much more compared to what we can already do for years on an emulator. Something to which we do not give enough importance and which is nevertheless capital, it is also the audio. The sound of Mario 64 has aged particularly badly, and would also have deserved a little refurbishment.

Well, it’s still nice to be able to simply connect the Switch in HDMI to the TV rather than bother to bring out the Nintendo 64 which looks terrible on current TVs. It is also possible to play the entire 3D All Stars collection in portable mode.

Super Mario Sunshine, THE highlight of the compilation

Moving from Super Mario 64 to Super Mario Sunshine, it is shocking to see the generation gap between the two titles. The generational difference between N64 and GameCube is truly startling. The audio is much better, and 16: 9 aspect ratio is a great addition. Here, we regret a little less that the game has not been remastered, it withstanding the ravages of time much better.

A lot of players have taken their heads over how Nintendo will transpose the game to Switch given the lack of analog trigger for years, so that in the end Nintendo does the most logical thing. When the trigger is pulled, the JET goes to full power. This is rather rudimentary and sometimes lacks precision … We could have thought that Nintendo would have a nice surprise in store for us by offering support for the GameCube controller through the official adapter, but this is not really the case.. The controller works, but is recognized as a simple USB device. It is impossible to modify the keys of this one and the analog triggers are not recognized as such… Too bad.

A technical point rather abused in the Super Mario Sunshine of this 3D All Stars collection, is that the game lags present in the GameCube version have also been imported into the Switch version. Fortunately, they are rather rare, and the game has aged quite well overall.

In Super Mario 3D All Stars, only Super Mario Galaxy passes for a rather recent game (not being too looking). Playing it by legal means was for the moment rather complicated or even impossible without having Wii U. Suffice to say that it is good news to see it land on Switch, being the opus where the lack of remaster makes it less feel of the 3 games, even if it is still present.

Based quite a bit on the movement recognition of the Wiimote at the time, it is possible to use the gyroscopy of the Pro Controller and the Joy-Cons. Even better, all of this is replaceable with the single Y key now allowing to twirl. In short, it is the most comfortable title on the Nintendo Switch, which makes us all the more question the absence of Super Mario Galaxy 2.

You have to know one thing, whether in physical or dematerialized version, Super Mario 3D All Stars will no longer be on sale as of March 31, 2021. An approach which remains without official explanations, but of which we can easily understand the stake. Indeed, Mario products and other games often tend to unleash passions. Proof of that, Super Mario 3D All Stars is already the second best-selling game of the year on Amazon even though it hasn’t even been released yet. By offering a limited release, Nintendo plays on exclusivity and artificial out of stock. This makes 3D All Stars a high performance product, we can easily predict a very large number of sales with very low development costs given that the original games have undergone very few modifications and other improvements.

It is also for this reason that producing a remaster would have been a much better solution to fans, more sustainable, but also proof that the game is not just present to fill a release schedule which is very scattered at the moment.

Overall, it is much better to play games from the 3D All Stars collection in portable mode than on the big screen.. Indeed the reduced size of the Switch screen pays a better tribute to these titles of yesteryear. The OSTs of the 3 games are also available on the title, but honestly, who is going to have fun listening to music through their Switch?

What Big N offers really seems incomplete to us. Especially since it is easy to say that the N64 and GameCube games should be available on a virtual console dedicated to the Switch for at least years …

We will end by saying that Super Mario 3D All Stars collection is a missed opportunity to deliver an exceptional remaster which would have introduced the old titles of Mario to a whole new generation. Being a huge fan of the games myself, it’s still hard to get back on the very dated Super Mario 64. As for Super Mario Sunshine and Super Mario Galaxy, it’s great to be able to play it on Nintendo’s current console, although again, it lacks some features that would have been nice.