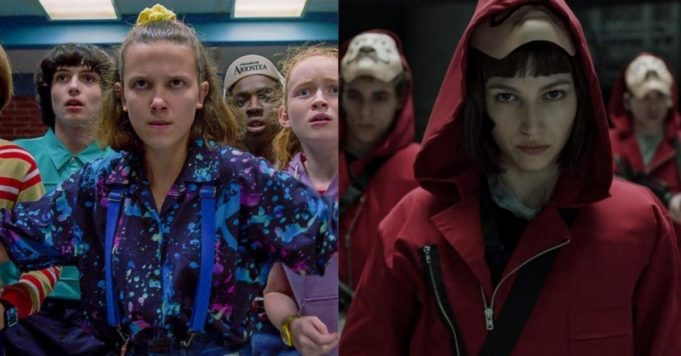 Will the 2020 Series World Cup final be played between Stranger Things and La Casa de Papel? There is the question.

On the one hand we have Stranger Things, the big winner of the 2019 edition. One of the most popular series on the Netflix streaming platform, with its 80s atmosphere, its cultural references, its Upside Down, its band of endearing teenagers and the rest of the characters just as interesting. For many spectators, its third season was notably the best, more refreshing, more enjoyable, while remaining terrifying and agonizing with complex and gripping plots. And we talk about the cliffhanger of the final episode? Suffice to say that we can not wait to discover season 4, in particular after the cryptic teaser to which we had the right at the beginning of the year. In short, there is a good chance that the series will be just as successful at the 2020 World Cup.

On the other side we have La Casa de Papel, who finished in the final with Game Of Thrones during the 2018 edition of the Series World Cup. Another of the most popular series on the Netflix streaming platform with its heists, twists and turns, heartbreaking deaths, clever strategies and nothing going as planned. She’s been keeping us going for four seasons now and if she almost stopped, we were delighted to learn that a fifth season was planned.. We can not wait to know if the robbers have planned to abandon the gold to survive or if Tokyo will take up the teacher’s torch in the next episodes. But will that be enough to get La Casa de Papel to come face to face with Stranger Things in the 2020 Series World Cup?

First of all, you have to admit that season 4 of La Casa de Papel was less successful than the previous ones with its viewers, while season 3 of Stranger Things conquered everyone. And we must also not forget that La Casa de Papel faces The witcher in group F. The witcher, which stars Henry Cavill as Geralt of Rivia, the Witcher, was a hit when it was released in December 2019, rising among the ten most watched series of the year on Netflix in France and becoming the most popular on-demand series in the world according to a study by Business Insider. So it may be that The witcher wins against La Casa de Papel before the series can end up in front Stranger Things. But this is only an opinion, because if the previous editions of the Series World Cup have taught us anything, it is that we can be surprised by the results!

To vote for your favorite series, it’s HERE.