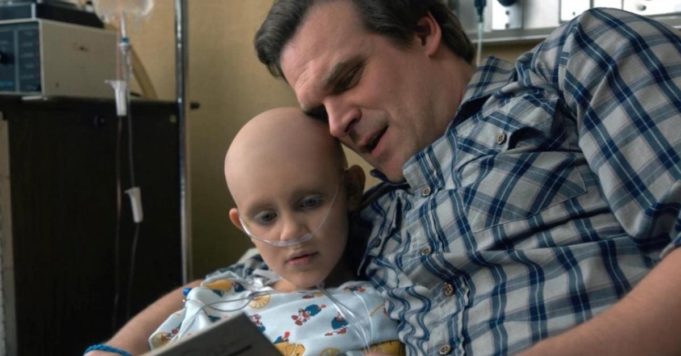 What if we learned in season 4 of Stranger Things on Netflix that Sara had powers and that she was dead in the lab of Hawkins?

While most Netflix productions are set to restart filming, this is not the case with our favorite fantasy series. Gaten Matarazzo (Dustin) is not very reassuring about the shots of season 4 of Stranger Things. Fans will certainly have to be patient before discovering this next burst of episodes, but it should be worth it! Seeing the teaser already broadcast, we understand that a large part of the intrigue will be filmed on Jim Hopper and its history. Perhaps an opportunity to return to the mystery surrounding the illness and death of her little daughter, Sara. According to Screening, her child would not have died of cancer like Stranger things makes us believe from the start, but was killed by members of Hawkins’ lab. We explain to you.

During the first season of the show Netflix, numerous flashbacks showed Hopper’s memories in the company of his daughter. One of them particularly challenged us: the one where you see Sara running in a park, stopping dead in front of something and screaming in fear. Such dread can only manifest itself when we see a demonic creature, and its expression reminded us of that of Will when he saw the Upside Down or the Mind Flayer. What could she have discovered? Subsequently, the little girl was taken to the hospital, and was diagnosed with cancer from which she died. Strange that these are the only indications given when it is the daughter of one of the main characters. According to the American media, Sara had powers like Eleven, and was killed by Dr. Brenner at the Hawkins lab.

What would support this theory is that in the flashback scene where we see Hopper mourning the death of his daughter, we recognize the stairwell of the lab. David Harbor, the sheriff’s interpreter, also confirmed the authenticity of this information in a previous interview: he burst into tears in the Hawkins lab, initially promising an explanation for the death of Sara in the second season . If the previous parts did not dwell on the subject, here is all that season 4 of Stranger things might reveal about Hopper. If indeed Sara had powers like Eleven, Dr. Brenner could experiment on her and kill her. Simulating cancer was the best way to hide everything he was up to about the little girl. We hope that the mystery around the death of Sara will be solved in the next episodes!