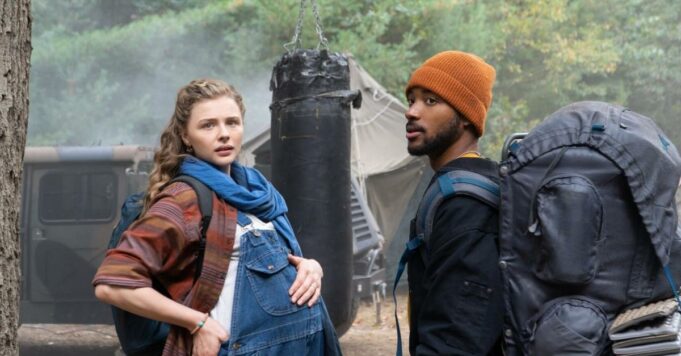 Chloë Grace Moretz stars in the new blockbuster movie, Mother / Android. Available in France on the Netflix platform since January 7, 2022, the feature film keeps us going thanks to the dangerous journey that the two main characters, Georgia (Chloë Grace Moretz) and Sam (Algee Smith) are trying to make. After an attack by androids, which have taken control all over the United States, the couple, who have taken refuge in the woods, painfully try to reach the city of Boston, which is still protected. But the journey is strewn with pitfalls given that Georgia is pregnant with her boyfriend.

Attention spoiler! Eventually, the two heroes manage to reach the city of Boston but are eventually separated due to an android attack. Fortunately, thanks to the help of a certain Arthur, the young woman will manage to get out of it and will even manage to free her companion from the clutches of their enemies. Together, they will welcome their baby whom they will decide to call Forest. But against all odds, Arthur was not human. His plan was to get closer to Georgia and gain her trust so that he could take control of Boston and wreak havoc. A confrontation therefore takes place and ends well for the young mother. But the end of Mother / Android is heartbreaking. Indeed, Georgia must abandon her baby by letting him go without her to South Korea, where he has a chance to be saved and to live..

Mother / Android: A final scene that echoes the story of director Mattson Tomlin

This very moving scene actually echoes the director’s own story, Mattson Tomlin, who was abandoned by his parents during the Romanian revolution. “The penultimate scene is the one I made this film for. Everything converges on this sequence. If I had missed it, I would have blamed myself. When we finished shooting it, I turned around. towards the team and everyone was crying “ he explained to the magazine Reverse. For her part, Chloë Grace Moretz said in The Kelly Clarkson Show : “It was a very personal relationship and experience that I had with him because I am pregnant with the baby he is supposed to have finally been”.

Mother / Android ends with the 24 year old actress, who burns personal photos, as was shown at the very beginning of the film. Then, we see her going towards Portland, to join another secure base. Sam, meanwhile, died after losing his legs, leaving his sweetheart alone in this apocalyptic world.. His disappearance was not, moreover, staged. “It was a question I always had for Mattson, whether we were going to see this or not, and he didn’t want to do it.” found Chloë Grace Moretz at Result. “He wanted it to be pretty clear – and that last image of me staring into the camera and being completely away in a lot of ways described everything we needed … When you go through such a heartbreaking experience and this trauma, you don’t. don’t react immediately. She probably won’t fully understand what happened to her for a very long time. “ she concluded speaking of her character.