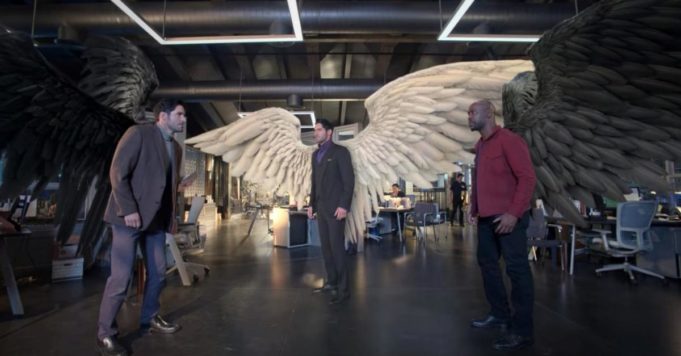 The second part of season 5 of Lucifer promises to be full of twists and turns, here are our theories on the continuation! Warning, spoilers.

The Lucifans didn’t waste a second before devouring the first 8 episodes of season 5 of Lucifer broadcast on Netflix. If they have no choice but to wait for the release of Part 2, luckily the showrunners are here to reveal some information about the penultimate season of Lucifer. During the last minutes of the show, Lucifer was about to reveal his love to Chloe. If we already imagined the beautiful moving scene that our two darlings were going to offer us, it was without counting on the presence of Amenadiel who came to spoil everything. Lucifer’s brother froze time before finding himself helpless in front of his baby Charlie, also frozen in his cradle. Of course, Michael, lurking in the shadows, was there to witness the scene and to rejoice in Amenadiel’s sadness. And as the three brothers began to fight, God appeared, angry to see them bickering. What could happen in the next episodes? Here are our theories.

Lucifer and Michael united thanks to their father

If Michael is the main antagonist in this first part, we don’t think he will be for long. If we will certainly learn what his “evil plan” was, Lucifer, Amenadiel and even God will do what is necessary for him to stop harming. We can even imagine that the two twins finally empty their bags and bury the hatchet during the long awaited “family dinner”. Now that Papa alias God is on earth, the whole family will be able to discuss and solve their problems! To also lighten Tom Ellis (he played Michael and Lucifer), we can clearly see another antagonist land in the next episodes. But as the showrunners of Lucifer, the one who will put the Devil in all his emotions, it will be above all … his father!

The first 8 episodes of season 5 of Lucifer showed us a different Maze: sad and in search of identity, Mazikeen is not in top form. The one who was once a fierce little demon has become a young woman tortured by the story of her past. Sometimes on the side of Chloe, sometimes with Michael, Maze has returned his jacket several times in this first part. If the truth about her mother Lilith has totally destroyed her, we must also admit that her previous breakup had already affected her a lot. If her leitmotif is now to obtain a soul, many internet users believe that the protagonist will lose her life in the season 5 finale. Maybe the latter will kill herself out of desperation, or sacrifice herself for Chloe or Lucifer … In any case, the showrunners have warned us: this second part will be the most moving in the history of the series.

Lucifer reveals his love for Chloe and becomes mortal

After losing his mojo and his immortality, we understood that Lucifer could be stripped of his powers at any time. As we know, his gifts are intrinsically linked to his feelings for Chloe, so we can imagine that when he says the two magic words to his muse, he could lose his power in season 5 of Lucifer. This is obviously not what we want him to do, but after all, love will bring him such serenity that he will feel like he feels just as powerful. If Lucifer is forgiven by God for his past mistakes, perhaps the creator of the universe will agree to have his son return to earth for the rest of his life, provided he becomes mortal.

Ella goes into a deep depression

We must admit that we are worried in advance for Ella, one of the most faithful close to Chloe and Lucifer. After being disappointed by her past relationships with infrequent men, Ella had finally let go with Pete, this ambitious journalist who would have been offered the moon. Sadly, it turns out that behind her angelic face was a real serial killer, and Ella could have been her next victim! Manipulated, betrayed, Ella is sure to mope a lot once Pete’s investigation is completed. Will she succeed in regaining the upper hand over her emotions or on the contrary will she seek to escape her daily life by drowning her depression in alcohol? We hope that his friends will be there to support him in this difficult test of life, but in the meantime, you can always lend your support to the show. Lucifer by voting for him in the World Cup series.