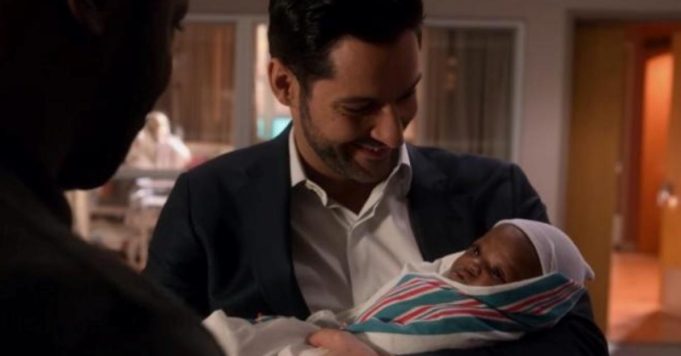 Amenadiel is paralyzed at the idea that his son Charlie could be mortal. What if a little trip to paradise in Lucifer’s season 5 was a game-changer?

If no one watches over the underworld at the end of the first part of season 5 of Lucifer, it is currently not the main occupation of Amenadiel. Be careful, if you haven’t seen all 8 episodes in their entirety, the spoilers start here. Michael managed to manipulate and escalate the fear of Amenadiel, already paralyzed that his son could be mortal. If Lucifer (Tom Ellis) does not immediately see where the problem is, Amenadiel explains to him that his child will fall ill, be able to be injured, will suffer and die one day or another, just like humans. The problem is, it’s a little hard to believe that Charlie will remain powerless throughout his life. Moreover, Remiel had told his brother that she felt a heavenly presence in season 4, of course referring to her baby. Which would mean his gifts just wouldn’t have manifested yet, maybe a short stay in paradise could be a game-changer?

Since birth, Linda and Amenadiel have believed that there is something “special” about Charlie, but after all, it is a thought shared by all parents on this earth. Nevertheless, we want to believe in the peculiarity of this little being half-angel, half-human. He is one of the few who is not afraid of Lucifer when he reveals his true face, on the contrary, the child smiles and stops crying. What to suggest that Charlie has a real link with the celestial world, but only, he is perhaps not in the right place for his powers to manifest. In paradise, his senses could perhaps increase tenfold. We hope that the second part of this fifth season of Lucifer We’ll tell us a bit more about it, but in the meantime, we’ll let you vote for your favorite shows in the Series World Cup.