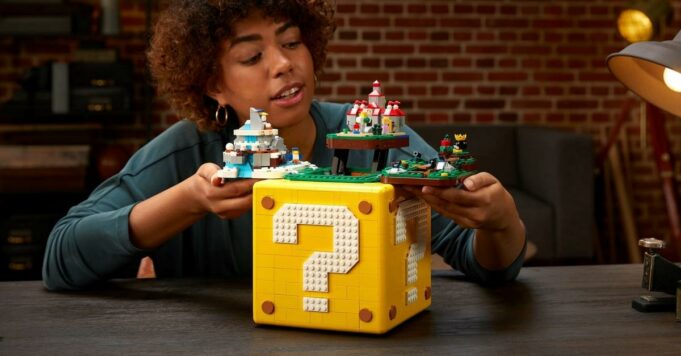 If there is an exceptional partnership at the moment, it is that between LEGO and Nintendo concerning the Super Mario range.. After the release of the LEGO Mario and its interactive world as well as the arrival of the adventures of LEGO Luigi, it is a set a little more decorative paying homage to Super Mario 64 which has just been announced by the Danish group. The least we can say is that it should delight fans of the mustached plumber, and especially the most nostalgic players among us!

Indeed, this new LEGO set consisting of 2064 pieces allows you to build the famous “Block?” that we no longer present. But that’s not all, this true icon of the video game hides a big surprise. Indeed, the block contains 4 levels from Super Mario 64, the very first 3D Mario, released at the time on Nintendo 64. It will therefore be possible to build Peach Castle, Battle of Bob-omb, Gla-Gla Mountain and Fatal Lavas, and thus to relive one of the most emblematic moments of our player lives. Take a look at these mini figures of Mario & Peach, it’s so cute that I would almost cry. Before I get lost all the more, I want to say that you will probably have to get up early to get this new LEGO set “Block?” which will be available on October 1st, only in LEGO stores but also on the official LEGO website priced at 169.99 euros.