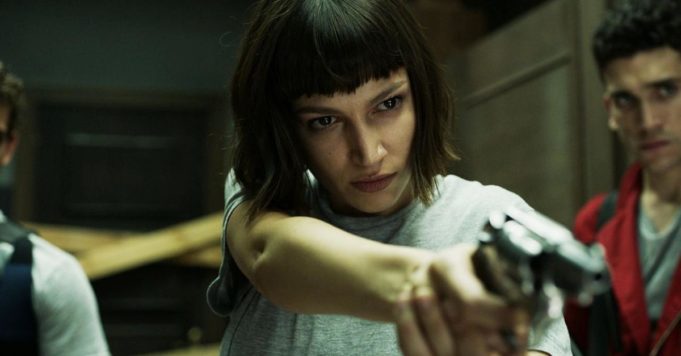 Finally, several clues can prove to us that Tokyo will be the only survivor at the end of part 5 of La Casa de Papel.

It has been several months since a theory about the conclusion of La Casa de Papel (Netflix) swells on social networks: it is rumored that Tokyo will be the only survivor. If a fan already imagines how Denver will die within Part 5 of La Casa de Papel, we currently have no idea how the other robbers might perish. If this plot is currently only speculation, it seems more and more plausible over the details given on the last episodes of the show. Indeed, recent filming videos reveal that Tokyo’s past will be explored, especially since Miguel Ángel Silvestre was reportedly recruited for the role of her ex-boyfriend. As the narrator of the show, the heroine will certainly tell how she came to embark on this terrible adventure, she who wanted to feel new thrills as she hit rock bottom after the loss of her boyfriend. As the creator of La Casa de Papel, Tokyo was chosen as the voiceover for the series “because it will be present until its conclusion”.

If that doesn’t mean she’ll be the one and only survivor of La Casa de Papel, many clues let us think that it is. First, she clarifies in voiceover several times over the seasons “that this story will end very badly and that she will be there to remember everything”. For example, she could relate everything that happened during an interview with the press, or during an interrogation with the police. In the same way, she could also speak to the descendants of the robbers in order to train them to take over the torch from their deceased parents. What makes us think the other criminals will die in this final season is that the writers of La Casa de Papel will certainly want to mark the occasion and end the series in a stunning way. As an added bonus, they’ve never had a hard time knocking out fan-beloved characters like Berlin or Nairobi.

Criminals have become a symbol of rebellion among the Spanish population, that is why the government will certainly seek to eliminate them, in order to silence them forever. Rio, Denver, Lisbon and the others could end their story arc by doing a heroic act for everyone in the country, even if it means dying afterwards. It would obviously be very sad not to see them take advantage of the money from their final heist, but they would leave making history. Until we see if we have to say goodbye to them, keep voting for your favorite shows during the World Cup series.