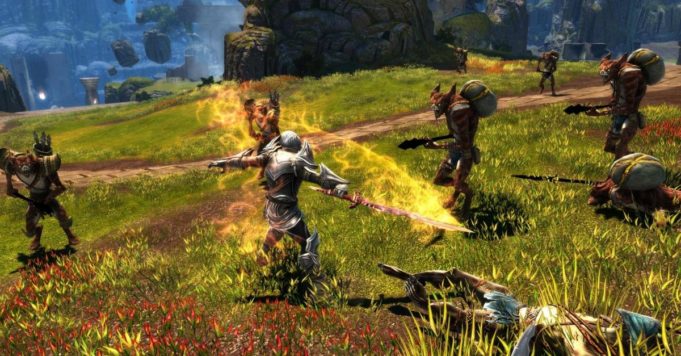 A lot of interesting new features over the next seven days, including the return of a game that has acquired cult status over the years, but also several DLCs on games already well established.

The return of a cult game

Kingdom of Amalur has a very complicated history. The game met with modest success when it was released, then the studio responsible for its development had many issues outside of it. Fortunately, in 2018, THC Nordic has bought the license from Electronic Arts, and this summer a remaster of the game was announced for release on September 8th.. The perfect opportunity for anyone who missed out on this cult action-RPG to give it a try.

The indie surprise of the month?

Star Renegades promises to be one of the beautiful independent surprises of the year. It will be a tactical role-playing game with a Rogue-Lite dimension, in which the player will have to fight an empire. It is not without reminding us of a particularly famous science fiction saga … What we notice first with this game is its artistic direction, which looks as original as it is interesting. We can test it from September 8 on PC, and a little later in the year on consoles.

Borderlands 3: Krieg the Sadist and the Incredible Booty of Pordel DLC

The fourth DLC for Borderlands 3

Krieg the Sadist and the Incredible Pordel Loot is the fourth DLC for Borderlands 3, and will be available on September 10th. Of course, we will be entitled to new quests, new equipment and new cosmetic elements, but also obviously new narrative elements for those who appreciate the game, and who wish to know more about the Borderlands lore.

The Outer Worlds: Peril on Gorgon

The first season pass expansion for The Outer Worlds

Peril on Gorgon will be the first season pass expansion for The Outer Worlds. The goal is simple: explore the asteroid Gorgon and discover the link that connects it to the Adrena-Time. And of course, we will be entitled to many new gameplay elements, including new weapons and armor, but also a new play area. What to give a little life to this game, this from September 9th.

A new expansion for Minecraft Dungeons

Minecraft Dungeons Creeping Winter is the second expansion for Mojang’s dungeon-crawler. Available for € 5.99, this new DLC will bring daily challenges and new merchants, which must first be rescued before seeing them land in your camp.. This DLC will be available September 8, and it is also important to note that this date will also mark the appearance of a physical edition of the game in stores.