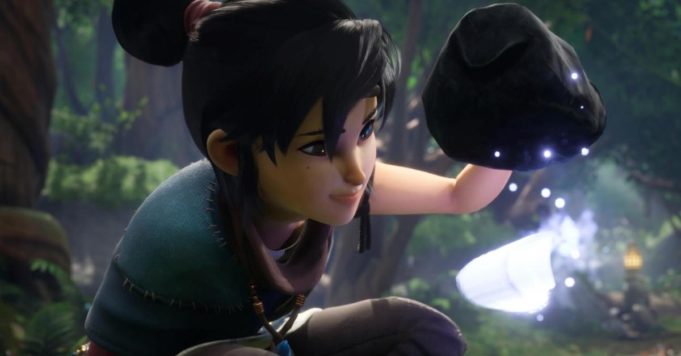 Kena: Bridge of Spirits caused a sensation during the presentation of PS5 games. The game will take full advantage of the advantages of the next-gen, from the SSD to the haptic feedback of the DualSense.

Kena: Bridge of Spirits first revealed itself during the PS5 games presentation last June. We discovered a heroine capable of controlling small minds. Kena will set off to explore a mysterious community and will have to face the ferocious creatures that inhabit the place. In an interview with GameInformer, the Ember Lab team details the advantages that the future Sony console will bring, starting with its SSD. So, from the menu, it would only take two short seconds to launch the game. For information, the game was first designed for the PS4; Mike Grier, Creative Director, recounts a laborious but productive journey to the next-gen: “We did development on PS4 for most of the project, and compressing it to get the performance we wanted was a nightmare. But after doing all of that, when we switched to the PS5, it was good, because we had a good foundation and then we could just enrich it and take advantage of the extra power. “

On the next-gen, you will have a much better chance of meeting Rot, the cute little creatures seen in the trailer, since they will be fully represented on the screen. If their function remains the same on the two consoles, we will therefore note visual differences. The DualSense’s adaptive triggers will also be used during heavy attacks or when using archery. Players should feel, through haptic feedback, the difference between holding a Rot, or shooting an arrow.. As a reminder, the game will be released on PC, PS4 and PS5 at the end of the year. And good news, a free update will be offered to switch from the PlayStation 4 to the next-gen.

For more next-gen news, we recently announced the port of The Witcher 3 to next-gen. Also, we have a Sony WH-1000XM4 Good Deal to offer, the brand new headset already on sale.