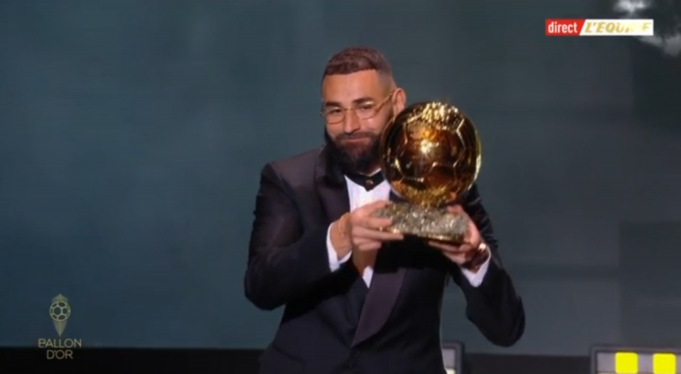 This Monday, October 17 was marked by the Ballon d’Or ceremony. An audience of stars and professional footballers met at the Théâtre du Châtelet to experience an evening full of emotions. Sandy Heribert and Didier Drogba were the masters of the ceremony and were able to attend, live, the coronation of Karim Benzema. The Real Madrid striker has won the iconic Ballon d’Or trophy. A childhood dream that finally came true. When his name was pronounced by Zinedine Zidane, who had made the trip to present him with the Holy Grail of football, a torrent of applause resounded in the room. For the football legend, this title is well deserved.

Benzema taking over Tupac’s flow tonight, for his coronation. 🐐 pic.twitter.com/mpKFnanlA2

In addition, Ronaldo, the idol of Karim Benzema, was also there. Suffice to say that the Blues striker was on cloud nine, especially since he was accompanied on the stage by his parents and his son. The football player’s speech was also welcomed by the audience present in the room. ” To see that in front of me is a source of pride. I think back to when I was little, all the work was a childhood dream“, he started, before adding: “ I grew up with that in my head. I had two role models in my life: Zizou and Ronaldo. It’s a lot of work, training even more, keeping this dream in my head. Everything was possible.«

An outfit in tribute to Tupac

Karim Benzema wanted to thank all his relatives, his club and the people who believed in him. For him, it is in fact the ” People’s Golden Ball“. And if his speech dazzled everyone, Internet users also spotted the beautiful tribute that the football player paid to a famous rapper. This small, discreet but symbolic detail was present in her look. He has put on an outfit that looks like two drops of water the one Tupac wore, an artist he adores. A striking resemblance that has not gone unnoticed. There is no need to say, Karim Benzema was the king of the evening.