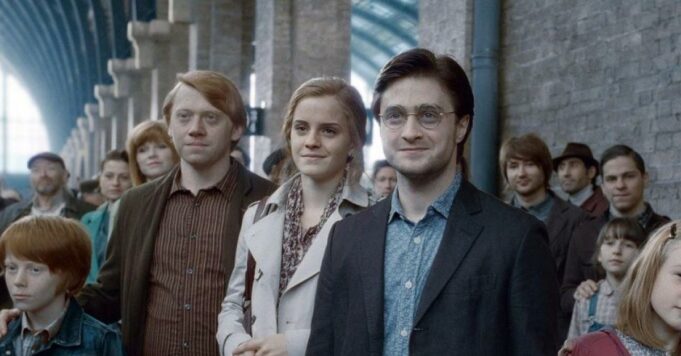 In 2001 was released on our screens Harry Potter at the Sorcerer’s Stone, the first installment of the Harry Potter saga. We were then able to discover Emma, ​​Daniel and Rupert playing the roles of Hermione, Harry and Ron. 10 years later, in 2011, came out Harry Potter and the Deathly Hallows, Part 2. The Harry Potter era seemed to be coming to an end, and it was with tears in their eyes that fans watched the actors say goodbye. What was our surprise to find our favorite characters in an exclusive meeting this January 1, 2022, with the documentary Back to Hogwarts ! If you haven’t seen it, get the tissues ready!

The trio of actors never really lost sight of each other. Indeed, Emma Watson recently confided in Vogue about her post-Harry Potter with Daniel Radcliffe and Rupert Grint: “They both hate WhatsApp and their phones in general. […] We don’t specifically have a chat group, but we talk to each other individually. Rupert sends me pictures of [sa fille] Wednesday and I die. Dan and I usually try to calm each other down. […] It’s been nice supporting each other knowing we’re going to be in the spotlight again.”

Even without a WhatsApp group, the three Gryffindors remain close.

The three former wizards therefore do not really have a WhatsApp group, but they keep in touch, and it is obvious that they are not ready to lose sight of each other! Having grown up together in an extraordinary context (not all children are lucky enough to experience their childhood and adolescence as wizards!), we can say without hesitation that these three will grow old together. Obviously, fans of the saga are crossing their fingers that other meetings will arrive, in particular with the possible adaptation of Harry Potter and the Cursed Child, the controversial play released in 2016.