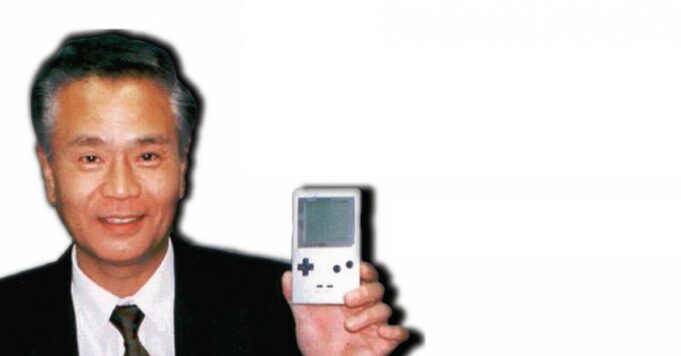 He is one of the most important personalities in the history of Nintendo, and by extension of the video game: Gunpei Yokoi, creator of the Gameboy, has a very singular history, which deserves to be examined during a few minutes.

When we talk about Nintendo, we mainly talk about Shigeru Miyamoto or Satoru Iwata. But the name of Gunpei Yokoi still remains rather confidential among video game enthusiasts, despite the simply fascinating career of this man, which rose through the ranks of the Japanese firm in the space of a few years. All thanks to great ideas, and a little bit of nerve. We come back here to his story, which really deserves to be told, especially for the incredible influence of man on the entire video game industry. Especially since originally, he was a simple janitor for Nintendo, even before the firm offered video games to the public.

Born on September 10, 1941 in Kyoto, Gunpei Yokoi discovered a real passion for DIY from his childhood, especially in the creation of toys: he used pieces of wood recovered in carpentry to make them himself. A little later, he became a big fan of model trains, in addition to his many passions: you need piano, judo, ballroom dancing or even scuba diving. The young Gunpei is very creative, and puts this creativity to good use from his studies, where he learns electronics.. Unfortunately, school is not for him and his results are ultimately quite poor. He seeks to be recruited by large companies in the sector such as Hitachi or Matsushita, but his poor academic results prevent him from achieving his dream. And in 1965, luck smiled on him: he could join Nintendo, a company dedicated to card and board games.

Yokoi is originally a simple concierge: he takes care of the maintenance of the machines which sticks the different layers of cards to each other.. Despite everything, Yokoi is nevertheless satisfied with his new job, which allows him to stay in Kyoto. But he has other ambitions … For his part, that is to say in his free time, Yokoi begins to design a lot of toys, which he offers to Nintendo. Seeing his immense potential, the firm immediately decides to promote him to a new role: Gunpei Yokoi will now be the designer for the firm. He designed a whole bunch of toys during the 60s and 70s, such as the Ultra Machine, the Love Tester, the Ultra Scope or the Lefty RX. Products that sell quite well. But in 1973, the oil shock hit Nintendo directly, and the company entered a very difficult period financially.

It was during this period that Yokoi invented his first portable game console: the Game & Watch.. The idea occurred to him as he watched an adult play with a calculator on the train. He decides to make some sort of portable electronic toy to pass the time in transport, and the Game & Watch immediately meets an incredible success. It is thanks to this idea that Nintendo comes out of its financial problems: Nintendo’s turnover quadruple in four years. And the firm then continued in video games, with the Nintendo NES in particular, which became the first successful home console in history. In 1989, Yokoi invented a revolutionary new product: the Gameboy (or the) Gameboy was marketed and enjoyed quite simply unprecedented success.. It is also the beginnings of Nintendo’s domination in the field of portable consoles. You will have understood it: if one speaks very little of Gunpei Yokoi as one of the most important personalities of Nintendo, his influence on the video game is quite simply immense. It is neither more nor less than one of its creators.