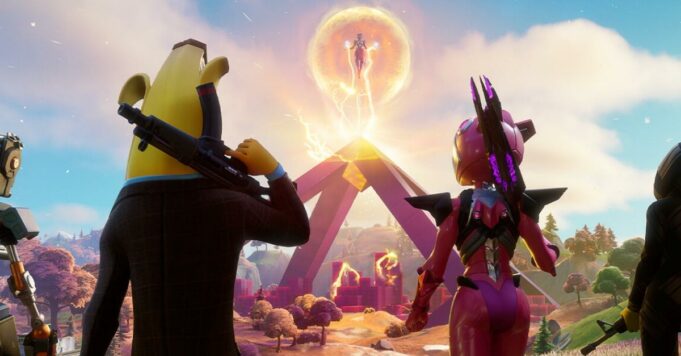 More than two years after its launch, Fortnite Chapter 2 officially comes to an end with the concluding event, dubbed “The End”. Dates, progress, use of remaining resources, here’s everything you need to know before the big day arrives.

This is a new page that will soon turn for the battle royale of Epic Games. On October 15, 2019, the studio officially launched Chapter 2 of Fortnite, which already marked a big turning point for players who were able to discover the first ten seasons of Chapter 1. Two years and eight new seasons later, it is now time for Chapter 2 to move slowly but surely towards its conclusion, of which the ‘announcement has just fallen. Epic Games has indeed made an appointment with the players for December 4 at 10 p.m. (French time) to take part in “The End”, the special event which will serve as a conclusion to Chapter 2..

Convergence now being accomplished, Queen Cube prepares her final assault on the island. All players will therefore have to join forces, whether with friends or with other players from around the world, in order to repel the taint of Detours. In this objective, it will be possible to form teams of up to 16 players, with the possibility of regrouping 30 minutes before the start of the event. Of course, as was the case for Chapter 1, Epic Games specifies that “The End” is a unique gaming event which will not allow any rebroadcasting. Additionally, the studio invites all attendees to adjust their display options before the event begins, after which it will be too late.

Also note that everyone who logs into the game between now and the end of the season will automatically receive a reward of 225,000 XP points. This is a compensation for the fact that Season 8, Incubation, is finally going to close a day earlier than previously announced. On this subject, you only have only a few days left to complete any quests you haven’t yet completed as well as unlock the season’s rewards. To help you, Epic Games announced thatan increased XP gain weekend will take place from November 27 at 1 a.m. to November 29 at 1 p.m..

Last information, all the resources won will not be kept. This concerns in particular cartoon Poiscaille ingots, colored jars and rainbow ink, which will be lost if not used. So be sure to spend them before December 4th. For the occasion, a Week of monster sales will be launched on November 30 at 3 p.m. to reduce the costs of all exotic character and item services. On their side, unspent Battle Stars will be automatically redeemed against the closest available rewards. On the other hand, no worries about pack quests, which will be kept during the next season of Fortnite.