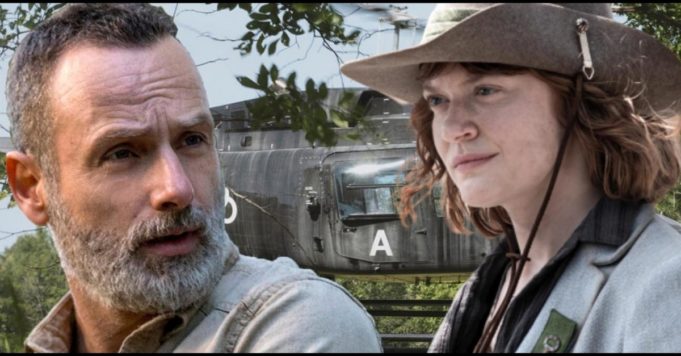 Season 6 of Fear The Walking Dead could make new connections with Rick Grimes.

We still don’t have a specific date for the broadcast of season 6 of Fear The Walking Dead on AMC, but the more time passes and the more we tend to bet for a return by this summer, and possibly for the month of August. Anyway, that still leaves us quite a bit of time to speculate on the sequel and it is the entire universe of The Walking Dead that we are interested in today. Watch out for spoilers at the end of season 5 of Fear The Walking Dead in what follows. Virginia and her group became the great antagonists of the spin-off of TWD, but we don’t know much about them yet.

Season 6 of Fear The Walking Dead should give us more details now that Virginia has – apparently – gotten rid of Morgan and has managed to capture the whole group and separate them. But we wonder if these new episodes will not also give us answers on the famous CRM group, which was mentioned in the intrigue of Althea and Isabelle a little while ago. This mysterious group will also be part of the next spin-off, The Walking Dead: World Beyond, and it’s also the key to what happened to Rick after he disappeared in season 9 of The Walking Dead.

Could it be that Virginia is not the leader of her organization and that her group is in fact under the orders of the CRM community, apparently not very pacifist according to what we know? Even if the slightly cowboy appearance of Virginia and his own does not resemble at all the paraphernalia of the soldiers of CRM, it may just be that the Virginia clan is one of many groups under the influence of CRM. Scott Gimple has already explained that he intends to exploit the universe The Walking Dead to the maximum and it’s been a few years that the links between the series have multiplied thanks to details or downright characters. We would therefore not be surprised to discover that Virginia at least knows the existence of CRM and to be honest we hope a little, just to have new information on the communities which owns Rick Grimes.