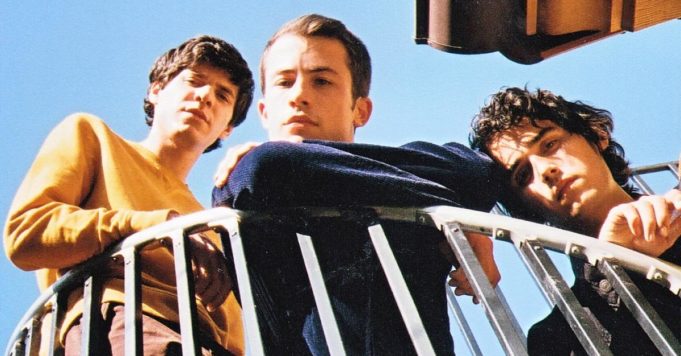 #Soundcheck presents Wallows, the rock group led by Dylan Minnette whom you know for his role as Clay Jensen in the Netflix series, 13 Reasons Why.

You know us well now, we don’t launch the #Soundcheck alert for nothing! After talking to Glowie about her sexual assault and the music industry, we would like to introduce you Wallows whose album Nothing Happens has been looping since its release. Friends since childhood, Braeden Lemasters, Cole Preston and Dylan Minnette have experienced a meteoric rise since the start of their training. It must be said that with dreams in the head, Wallows is at the heart of a growing success which breathes through its originality a wave of novelty in indie-rock music. It’s simple, you can’t really put labels on this group that produces the music they want. In any case for melty, Wallows is without a doubt one of the most exciting bands of the year which we follow with great enthusiasm.

“We have been playing for over ten years together, so being able to release an album with best friends is incredible for us.” Cole Preston, drummer, tells us Wallows from the start of our interview. “We grew up writing most of the songs on the album so it really reflects our lives.” adds Braeden Lemasters, guitarist and singer. Nothing Happens is the first album of the group which gave an overview of the extent of its musical palette in a first EP entitled Spring in 2017. Still pushing the boundaries of musical genres, Wallows has nevertheless managed to produce a beautiful indie-rock nugget with pop touches with sounds of the 80s.

The Nothing Happens tour has been amazing so far. Thank you all for making these the best shows we’ve ever played. Recap # 1 available for viewing now. ????: @nikoliparty (Link to full video in story)

“We grew up in Los Angeles with the Internet so we were inspired by everything around us every day” tells us Dylan Minnette discovered in the series 13 Reasons Why. If the Internet was the main tool for the musical development of the group, it does not forget that it can be as dangerous: “I think the ultimate goal of Wallows is to show at a time when social networks are everywhere that it is important to stay yourself.” tells us Braedon before adding “It’s literally more than ten years that we have been together and that we have not let go of pure passion. You have to surround yourself with real people, who push you up and allow you to feel in your place . “ he tells us with great conviction.

As the American group mainly welcomes actors (Braeden and Dylan), Wallows naturally takes particular care in producing quality visual content: “I think we have the ability to have several perspectives in order to carry out this project” Dylan tells us before resuming: “To be able to create our own visual identity in order to compliment our music in the best possible way is a real privilege.” Braedan, who seems to seem to agree with his friend, adds: “It is also a kind of showing another side of the songs. A side which our listeners would not necessarily have interpreted in our way when listening to the songs the first time.”

Since the release of Nothing Happens, Wallows has toured the world going through the biggest festivals like Coachella. After a remarkable stint in France with a handful of concerts and festivals, the group is back in Los Angeles. “The album really reflects experiences from our personal lives so to see so many people concerned by it is fantastic.” Cole tells us before Dylan adds: “We realize how lucky we are to be able to play our music all over the world.” If for the moment the group is back on its native land, it is certain that it will return to France very quickly and melty will be at the forefront not to miss a note of this Californian rock that we love so much.