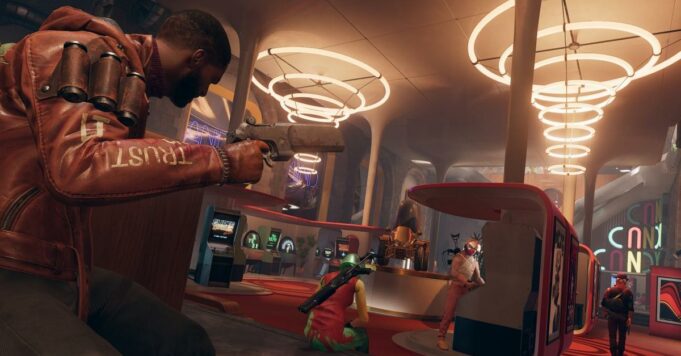 As its release approached, we were able to attend a press conference with the developers of Deathloop, who went into more depth on the game’s design and behind the scenes. Importance of storytelling, scalable difficulty and creation of the game. universe, we tell you everything you need to know.

In just a handful of days, Deathloop will finally be available exclusively on PS5 and PC. As the fateful date approached, we were able to witness a press conference organized by Bethesda in the company of several members of the Arkane Lyon team, namely Dinga Bakaba (game director), Pawel Kroenke (lead narrative designer) and Sébastien Mitton (artistic director). During it, the developers came back in more detail on the genesis and conception of this new title, described as being “The studio’s most ambitious proposal”, before answering a number of questions asked by the various invited media. We therefore suggest that you take stock of the main information to remember.

Storytelling as the cement of experience

At the opening of the conference, we were treated to a good reminder of what the Deathloop experience will be like while enjoying a big gameplay sequence, which was none other than the one broadcast during the State of Play in July. We will therefore not dwell on it, especially since we ourselves have informed you of our first impressions of the game in our recent preview, which we invite you to discover if you have not already done so. At the end of this presentation, Pawel Kroenke then intervened to talk to us in more depth about the narrative aspect of the title, which will be the most focused on the narration of the entire Arkane Lyon catalog. As a result, the team faced several challenges during development.

Indeed, for the lead narrative designer, “Storytelling is the glue that unites all the elements of the game: artistic direction, gameplay, level design, etc. “. So it took establish a narrative framework that is both coherent and credible but at the same time flexible and inclusive so as not to hinder the freedom of approach given to the players. One of the difficulties then was to ensure that the narration, despite its fragmented appearance, can keep a certain rhythm and remain very responsive to the player’s actions in all circumstances. The challenge was all the greater as the centerpiece of the storytelling relies on the concept of a time loop, which required extra work to ensure that the player constantly felt like they were making progress.

According to Kroenke, “ even if they are the same environments, the same actions, Colt is no longer the same as in the previous loop ” with each new start. Moreover, when asked about it, the developers claimed that Deathloop story progression “Never go back”. In other words, there is no loss of information from one loop to another and there is even a menu listing all the previously discovered tracks, which allows you to always know where we are and what the next step is. This also applies to weapons and powers, which are renewed regularly and which are so many ways to avoid any feeling of repetition and weariness for the player.

A unique but evolving difficulty

This is the perfect opportunity to come back to a question that has made a lot of talk lately: the difficulty. Like a game like Returnal, which will take a very different approach, Deathloop will only offer one difficulty level for all players. Nevertheless, Dinga Bakaba told us that it had been designed to evolve in relation to player progression. What must be understood by this is that if the latter is doing brilliantly, then the aggressiveness and agility of the enemies will tend to increase. On the contrary, in the event of repeated failures, these will be gradually reduced. This will also have a effect on the frequency of Juliana’s appearances or the quantity and quality of available resources. Thus, for the game director, the increase in difficulty should not necessarily be seen as a punishment since it “Also increases in favor of the player” on some aspects.

The developers also clarified that Juliana’s interventions are entirely random, although they only occur when we are in an area with a target and we are getting closer to our goals. Note, however, that even when it has been eliminated, it retains the possibility of returning later. Finally, the fact of embodying him as a player may have a real interest in the sense that his approach is not at all the same than with Colt: it is possible to harass him, to attack him head-on, to set traps for him, to kill him discreetly, while knowing that the latter’s enemies are on his side. It thus offers the pleasure of increasing the difficulty by confronting a real player rather than an AI, in addition to making us unlock a series of cosmetics. However, playing with her is absolutely not essential to know the whole story.

Before arriving at the result that we know today, the team obviously spent a lot of time thinking about the world of the game and the direction to take for this new project. The lead narrative designer explained to us that this differs a lot from other Arkane productions by its tone of humor and lightness. This does not prevent him from broaching serious subjects, but it does so in a a way that contrasts particularly with what a license like Dishonored could do previously, whose approach was intended to be quite dark. This humorous side has also made it possible to define the character of Colt, which has been designed so that the player can feel close to him with regard to emotions.

That’s also the humor that served as a mainstay in building Colt and Juliana’s relationship. As a reminder, the latter is the only other person in Blackreef to remember everything despite the time loop. She therefore interacts with the hero throughout the game, which leads them to become “Best enemies”. Corn his character remains deeply ambivalent. She can choose to help Colt or to put a damper in his direction, without anyone really knowing why. She’s having fun with him, and it’s unclear whether that makes her a vicious slayer or if it’s just a way for her to express her loneliness. Note that for Dinga Bakaba, Deathloop doesn’t fall for B-series humor though : everything has been designed to fit into the game world.

Journey to the heart of the 60s

The change of tone is not the only major evolution of this new production, however. After exploring the Victorian era in the Dishonored series, the developers really wanted to renew themselves and change horizon. The atmosphere of the 60s, which is precisely in phase with the more humorous and light tone, then became obvious to them.. Not only did this inspire them a lot, but in addition it is about a period which was finally rather little treated since the majority of the works turn more generally towards the 70s. Consequently, all the research work making it possible to define the context of the game and its visual universe could begin.

The creation of the Deathloop universe

Sébastien Mitton came to talk to us about it, with many sketches to boot. He began by explaining to us that from the pre-production phase, there was this desire to create an intimate setting centered on exploration. For Deathloop, Arkane didn’t want a huge, generic world, they wanted something more mysterious. This is how the concept of Blackreef, a Nordic island where takes place “An endless party” for the inhabitants. But to create a believable universe, we had to imagine a real past at this place. The team therefore started on the idea of ​​a paranormal phenomenon inspired by the Bermuda Triangle, and more precisely on the idea of ​​a time loop, which quickly imposed itself on the developers.

From there was born the story of Blackreef, with the arrival of the Visionaries whose objective was to leave the outside world to be able to live a life without worries and without consequences. From the equipment left by a former military group, they were able to develop their own technology and establish a time loop, which allows all the inhabitants of the island to experience the same day in a loop. The problem is that they are not aware of it, and their existence no longer makes sense. All this being done, it was then necessary to compose the entire visual universe of the game. for the design of the island, the Faroe Islands, located between Scotland and Iceland, served as the main source of inspiration thanks to their extreme climate and their desolate side.

But the work doesn’t stop there, and Arkane has done a lot of research within various sources in order to ensure that the entire universe is as close as possible to the time he portrays.. Pop culture has obviously helped a lot with films such as Point of No Return (John Boorman, 1967), The Thing (John Carpenter, 1982), Warriors of the Night (Walter Hill, 1979), the filmography of Quentin Tarantino and more for references. Archival images from the 1930s and 1940s were also used for the environments, while films like James Bond were used for the design of objects and props when models and personalities helped define the look of the characters.