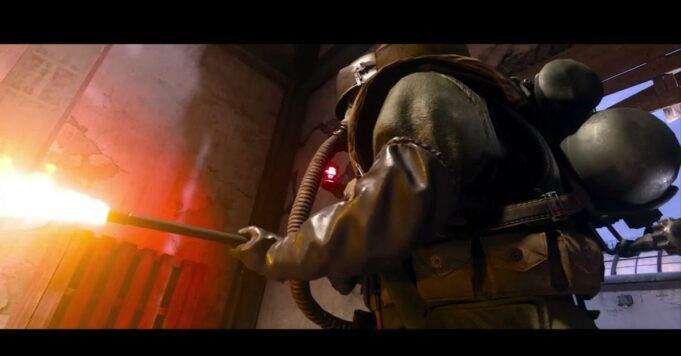 We finally got to see what the multiplayer mode of Call of Duty Vanguard was like. Here is what we thought of the maps, weapons, killstreaks and everything that the next CoD has to offer.

While the exit of the Call of Duty Vanguard open beta is only a few days away, we had the chance to test the multiplayer mode of the next installment in the series. Back on our experience of a little over two hours on the beta of the new title from Activision and Sledgehammer.

First things first, here is the list of Call of Duty Vanguard weapons that can be tested in the beta version of the game:

Good gameplay surprise, the handling of the weapons is quite pleasant, although heavier than in Cold War. The aim is fluid, the feeling of recoil is felt without being crippling and the blind shooting (new feature which caused much ink to flow) is far from being as cracked as one might fear. Level improvement, each weapon has several locations (up to 10) allowing to evolve the aim, the damage, the melee, the recoil, etc. By chaining the parts you will increase your level in order to unlock new weapons and upgrades. During the beta, the level of players was stuck at 20, but in the game, it should be possible to progress to level 30. Only downside in terms of combat, the number of weapons quite limited, but it does not doubt that new equipment will arrive soon!

During the beta of Call of Duty Vanguard, we had the opportunity to discover different maps of the next CoD. The first of them, Gavutu is a beach in the Solomon Islands (where Japan and the United States fought fiercely during WWII). The map offers quite varied environments with a beach, jungle and a large beached military boat. However, the map is one of the least inspired in the game. All the paths are similar and the open terrain offers a big advantage to fans of long-distance weapons. The second map is called Hôtel Royal, a nightly clash on the roof of a Parisian hotel in the midst of a bombardment. Unlike the first Call of Duty Vanguard map, Hotel Royal offers a real variety of paths to take to surprise the enemy. The fact of being able to pass from the roofs to the top floor of the hotel adds a certain verticality that is more than welcome.

#VanguardBetaHotel Royal – Night map Gavutu – Teal Blue Ocean and Palm Tree’s Red Star – Snow mapLooks like we have a nice diversity of maps in the Beta!

The following map, Eagle Nest, sends you to a building on top of a snow-capped mountain. The level-design of the map (without being revolutionary) is pleasant with a nice alternation between open and closed area. On the other hand, the map seemed quite small and could quickly become unplayable in 24v24 (the test being carried out in 16v16). Finally the last map, titled Red Star, takes place on the snowy edge of Stalingrad. Here too the map is illustrated by the diversity of its paths and its many nooks and crannies allowing the enemy to be taken from the rear. A map cleverly designed so that it is not possible to forever hold the same position by chaining kills without moving.

Big novelty of this Call of Duty Vanguard, the Matchmaking system has been redesigned in order to refine the games according to certain predefined parameters. Vanguard’s “Combat Pacing” is divided into 3 options: Tactical for 6v6, Assault for 14v14 and finally Blitz for 24v24. With this new way of working, it is now possible to experience different battles on the same map and to find the part adapted to your desires. If the idea is appreciable, we keep some reservations about the smallest maps that would become unplayable in 24v24. It remains to be seen how Activision will address (or not) this problem in the future.

“Patrol”: the new game mode of Call of Duty Vanguard

After the disappointment that some players have experienced with the online mode of Call of Duty Black Ops Cold War, Activision and Sledgehammer want to reconnect with franchise aficionados. The first mode that we were able to test during these two hours was the “Patrol” mode. In this new game mode, you will have to keep a moving area as long as possible. In the obligation to move at the same time as your objective, beware of the opposing offensives which will take advantage of the moments when you are most exposed. “Patrol” skillfully alternates between attack and defense as the game progresses, forcing you to take advantage of the field and evolve as a team.

Apart from the “Patrol” mode, all the other game modes offered during the beta of Call of Duty Vanguard were very classic. Domination, Confirmed Elimination or Team Deathmatch, are always welcome, but we can still regret a lack of originality in the diversity of the modes offered. Far from taking risks, Activision and Sledgehammer therefore prefer to consolidate their achievements with an effective multiplayer mode, but not revolutionary.

Call of Duty Vanguard: All Killstreaks

All online FPS enthusiasts, and especially CoDs, are familiar with the killstreaks rewards and that’s good, because this Call of Duty 2021 marks their comeback. The term refers to the rewards obtained by a player who manages to chain a certain number of kills without dying. Call of Duty Vanguard therefore has a killstreak system to have an advantage depending on your success during the game. Here is the breakdown of Call of Duty Vanguard killstreaks:

New abilities to equip according to your playstyle

Despite the arrival of first trailer for Call of Duty Vanguard, it was not yet known what would be the capabilities present in the new FPS from Activision. By playing Call of Duty 2021 you will have the opportunity toequip up to 3 characteristics from a more or less long list. These abilities will give you certain advantages during the game (spotting enemies, running faster, etc.). A mechanic that is not revolutionary, but which allows you to adjust your characteristics to better suit your style of play.

Ultimately, what about the multiplayer mode of Call of Duty Vanguard?

Although the beta of the Call of Duty online mode is quite limited, these few hours allow us to get a first idea. If the gameplay of the game is pleasant and some very involved parts, we can not help but deplore a lack of originality. Of course, we are aware thatit is not possible to revolutionize a license like CoD with each new release. Still, for the moment, Activision seems to prefer to consolidate its gains (the return to the Second World War is quite telling) rather than to take risks. A formula that has proven itself, but which risks wearing down the patience of the most loyal fans.