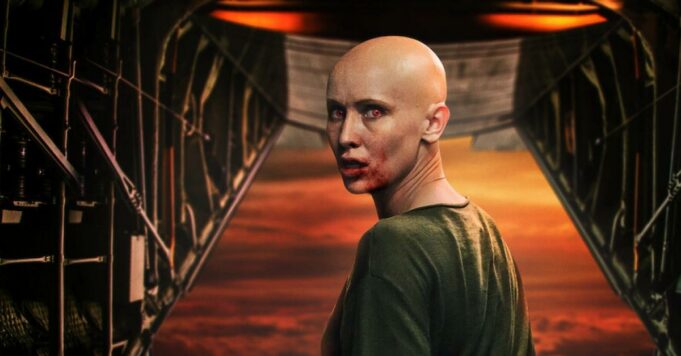 In addition to its intrigue on vampires, Blood Red Sky sends a message against racism that is relevant and impactful.

Blood Red Sky on Netflix is ​​a movie about a vampire and terrorists on a plane. We follow more particularly Nadja, a woman suffering from a blood disease, who when she does not take her treatment, turns into a sort of vampire. As terrorists storm the flight, Nadja has no choice but to let out the beast inside her in order to save the passengers. At the same time, the group of terrorists, mainly composed of white-skinned people, forcibly recorded a message resembling those of the jihadists to the two Muslims in the flight. It is horrible how the authorities automatically fall into the trap, not imagining that the terrorists can be people of other origin than that of the Middle East.

In the end, the two Muslims of the theft, Farid and another, are considered the heroes of this case., showing themselves ready to sacrifice their lives to save the passengers. Racism against people of Middle Eastern descent is still so prevalent in America, which is why the hijackers of Blood Red Sky knew that it would be easy for society and the authorities to believe that there had been another attack by jihadists after the 9/11. Finally, Blood Red Sky sends out a beautiful anti-racism message, recalling how criminals have no color, origin or race. Likewise, the thriller reminds us that we should not judge a person by these same criteria, because they are not the ones who define who we are. For now, Netflix did not speak about a possible sequel to Blood Red Sky, but here are what intrigues we might expect.